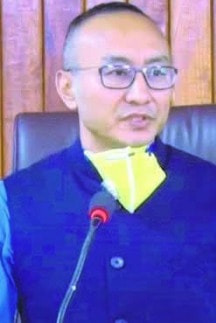 In-charge of Mizoram BJP – Mmhonlumo Kikon, who is also a BJP MLA from Nagaland, has batted for proper demarcation of the Assam-Mizoram border.

Kikon said that a proper and full demarcation of the Assam-Mizoram border will ensure the settling of the decades-long border dispute between the two states.

Mmhonlumo Kikon expressed that with union home minister Amit Shah personally overviewing the matter, a solution to the Assam-Mizoram border dispute is likely to be reached soon.

“Both the states must engage in dialogue and the inter-state border must be fully demarcated,” in-charge of Mizoram BJP – Mmhonlumo Kikon said.

His comments came a day after at least five Assam Police personnel were killed and more than 60 people, including an SP, were injured as the festering border dispute between the two northeastern states erupted into a bloody conflict.

Assam chief minister Himanta Biswa Sarma had claimed that Mizoram Police had opened fire with light machine guns (LMGs) during the clash that resulted in the death of five Assam Police personnel and a civilian.

While the BJP is in power in Assam, Mizo National Front, a member of the saffron party-led North-East Democratic Alliance (NEA) rules the bordering state.

Even though the two parties are allies they should help resolve the matter, party sources said emotions have been running high on both sides following the skirmish, and that a lot will depend on how the central government uses its agency to calm things down and push both states towards a durable solution.

“All parties in the two states have hardened their positions along the regional lines,” a source pointed out, adding that the crisis had been flaring up for some time before it escalated into violence on Monday.

Notably, union home secretary Ajay Bhalla has summoned chief secretaries of Assam and Mizoram over the violence in the inter-state border.