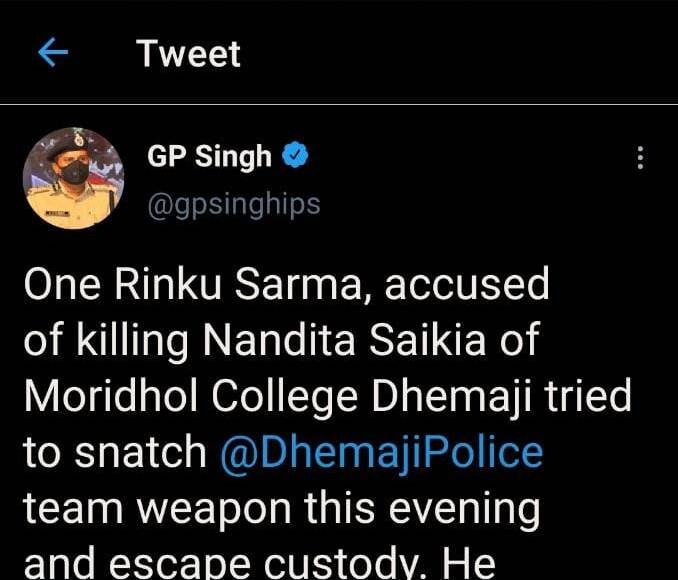 Guwahati: Last month, the murder case of a young college girl Nandita Saikia from Dhemjali created sensation among the public. The incident created ripples, with widespread protests across the state. The murder case brought a threat to the girl’s safety and rights.

In connection with the case, police have arrested accused, Rintu Sarma, who allegedly attacked Nandita. Nandita, who got severely injured in the attack, eventually succumbed to her wounds earlier this week at a hospital.

As per a tweet by GP Singh, it was informed that the one accused, Rintu Sarma has tried to snatch police weapons and escape the police custody. However, he was injured in the firing under self-defence.

GP Singh tweeted, “One Rintu Samra, accused of killing Nandita Saikia of Moridhol college of Dhemaji tried to snatch @dhemajipolice team weapon this evening and escape police custody. He was injured in police firing in self-defence and to prevent escape. @Asaampolice @CMOfficeAssam.”

The Dhemaji Lawyers’ Association (DLA) has revealed its fury over the girl’s attack and chose not to advocate for the murder accused Rintu Sharma.

The Lawyers’ Association has also stated that it is really sad to lose a brilliant student and decided that no lawyer from the association will support Sharma in this case.

The Assam cabinet, which met on Thursday, revealed its deep grief over the event and chose to transfer the matter to a fast-track court for a quick hearing.