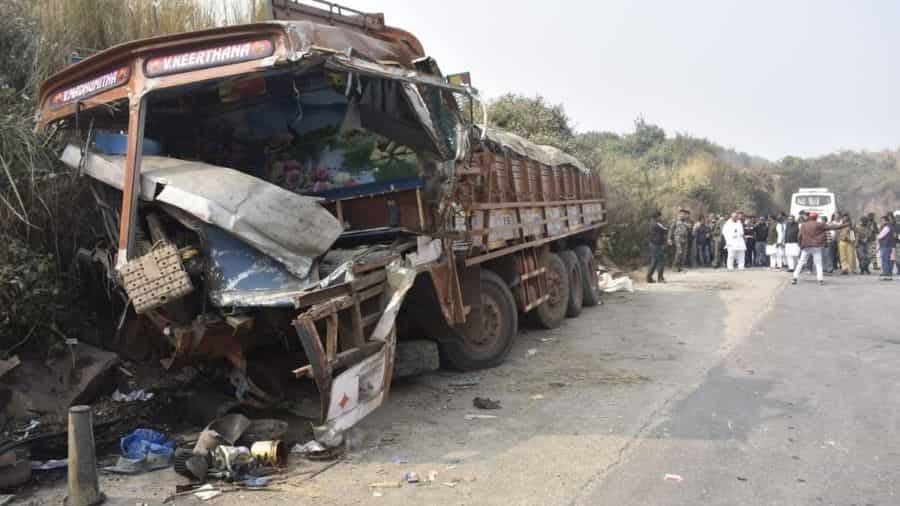 Digital Desk : More than 16 people are believed to have died after a head-on collision between a passenger bus and a truck carrying LPG cylinders took place on Wednesday morning, in Pakur district of Jharkhand.

Preliminary reports suggest more than two dozen people have sustained serious injuries following which they have been rushed to different hospitals for treatment. The actual number of casualties is yet to be ascertained, said Pakur superintendent of police Hrudeep P Janardhanan.

All the injured stuck inside the bus and the truck have been pulled put. The police are yet to confirm the number of casualties as the police assume around 7-8 persons to have died on spot.

Latest reports suggest the number of casualties increasing to 16, while the number of injured stands at 26. Of the injured, 3 are said to be in critical condition.

The injured who were stuck inside the bus, were pulled out after dismantling the vehicle with gas-cutters, police said.

The impact of the accident was such that the front ends of both vehicles got stuck to each other. Both the bus and truck were overspeeding and it is suspected that the impact was huge due to the presence of dense fog, lowering the visibility.

Fortunate enough, the truck carrying gas cylinders didn’t explode, or else the accident might have been more horrific.

Considering the situation, it is feared that the death toll might rise.