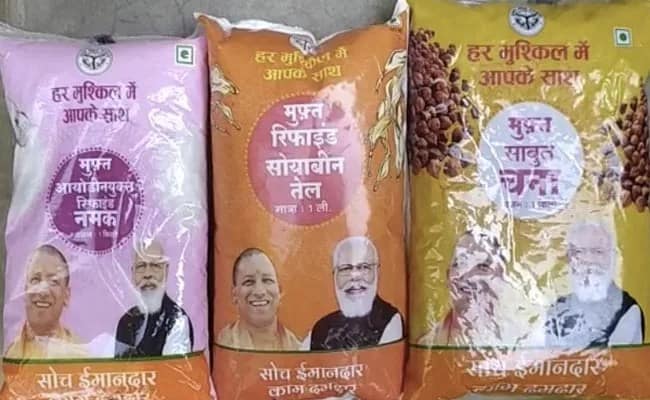 Lucknow: Political parties usually like to attract voters with their pre-poll freebies to aid in their upcoming elections. Of course, the higher number of votes will surely prove a big win for the political parties and selectively distributing those freebies is a trick only these politicians would know better. In another such big draw, BJP this time has targeted the poor, siding away from the middle class, distributing free packets of dal, salt.

So, packets of salt, refined oil and ‘chana’ with photographs of PM Modi and CM Yogi were distributed among the poor through 80,000 ration shops in UP on Sunday, as part of the state's free ration scheme, reports NDTV. Some packets also carry the slogan -- "Soch Imandaar, Kaam Damdaar" (honest thought, solid work) –which is the BJP buzzword for its campaign. Recently, the Centre had announced that it would extend the Pradhan Mantri Garib Kalyan Anna Yojana for four months - from December 2021 to March 2022.

The scheme, which began during the COVID pandemic last year, provides an extra 5 kg ration per person per month for free to all beneficiaries covered under the National Food Security Act (NFSA). But with elections in the state just two months away, the government has gone a step further, saying it will provide each beneficiary of the Centre's free ration scheme an additional kilogram each of dal, salt, and chana.

On Twitter, Yogi Adityanath's office on Saturday called the exercise a 'Double Ration' scheme - a play on its campaign slogan 'Double Engine Ki Sarkar' which refers to its governments at the Centre and in the states.