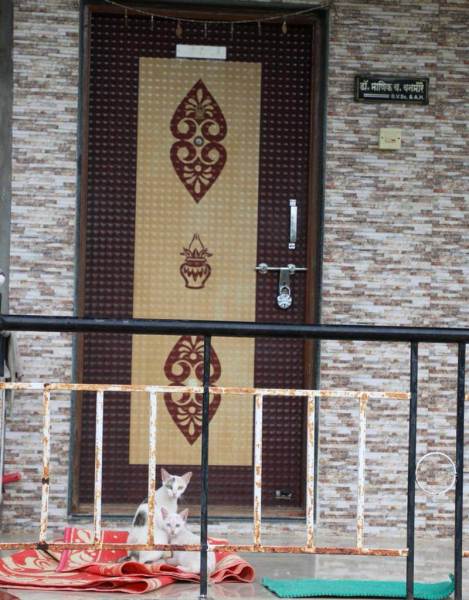 The village is still in shock a day later.
At the veterinarian's residence, the bodies of Manik, his wife Rekha (45), their kids Anita (28) and Aditya (15), Manik's mother Akkatai (72) and Popat's son Shubham (28) were found. The bodies of Popat, a local school art teacher, his wife Sangeeta (48), and their daughter Archana (30) were found at their home about a kilometre away.
Close family friend Ashwini Sawant began to cry and added, "I literally grew up in their home." They were all incredibly kind and thought of me as one of them. I have attended every significant event, from all the special meals prepared at their house. I visited their home for a paani-puri celebration less than a week ago. They were a contented family who cherished pets. But I also know that they have been experiencing stress due to debt for the past few years. However, we had never anticipated this.
The suicide notes "indicate that the family sought to create a production unit for steel items and had borrowed money," a police officer said. The compounder who worked at the veterinary clinic was one of many people the family had borrowed money from, the officer claimed.
The authorities are also looking into claims that the families were duped into losing money in a sort of investment scheme. "Manik uncle used to tell me that they had put money into a plan and were hoping for significant returns that would pay off their debts and leave them with a sizable chunk of money." The Vanmores advised me not to visit their home on one of two occasions because lenders had already arrived, Sawant said, adding that the family had left their ancestral home six to seven years earlier.
Sangli SP Dikshit Gedam stated, "We are investigating every angle of this matter."
"Aditya, (Manik's son), had visited my house the day before, and we had our customary conversation. In school and extracurricular activities, he excelled. Recently, we had a friend's birthday party. Sujal Chaundaj, a neighbour and Aditya's classmate, commented that nothing seemed strange about him or anyone else in their family.
The day before the event came to light, Dr Manik's son visited the shop and grabbed a jar of yoghurt, stating that his father would pay me later, according to Sudhakar Gaikwad, the owner of a grocery store in the area. His older sister arrived that evening and paid the debt, stating that there were no outstanding balances at the time.
The Vanmore brothers and other family members had taken out loans from moneylenders at interest, according to police inspector Ajay Sindkar. "Despite the fact that they were paying the interest on time, the lenders and other suspects repeatedly and visibly harassed them on a mental and physical level." "After the pestering got intolerable, the victims committed suicide," Sindkar claimed.
To find and apprehend 12 additional offenders, he claimed, "We have sent out teams to Sangli, Kolhapur, Solapur, and Karnataka."
All of those detained thus far are Mhaisal residents: Nandkumar Pawar (age 52), Rajendra Banne (age 50), Anil Banne (age 35), Khanderao Shinde (age 37), Dr Tatyasaheb Chougule (age 50), Shailesh Dhumal (age 56), Prakash Pawar (age 45), Sanjay Bagadi (age 51), Anil Borade (age 48), Pandurang Ghorpad (46).
In addition, the police have charged the defendants under the Maharashtra Money Lending Regulation Act and the SC/ST (Prevention of Atrocities) Act.
But Poonam Chaundaj, the family's next-door neighbour who lives next to Manik, finds little solace in any of that. "They were cat lovers.  since the deaths, we have tried to feed them but they are not eating it."
Also Read: 9 members of family found dead at home, cops suspect suicide