Mizoram to finish distributing identity certificates to 24,000 Myanmarese this month 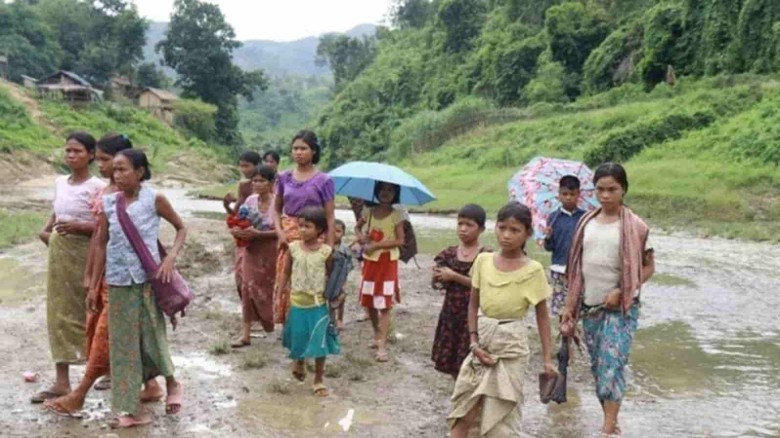 Following a military coup in Myanmar on February 1 of last year and subsequent violent clashes between the Myanmar Army and local civilian militaries in Chin state and other parts of the nearby nation, around 24,000 Myanmar men, women, and children crossed into the Indian state seeking refuge.

Digital Desk: On Tuesday, Mizoram Home Minister Lalchamliana said that the Mizoram government, which has been issuing identity certificates to around 24,000 Myanmar refugees, will complete the process this month (April) for better management of all aspects, including providing aid to the relocated foreign nationals.

Following a military coup in Myanmar on February 1 of last year and subsequent violent clashes between the Myanmar Army and local civilian militaries in Chin state and other parts of the nearby nation, around 24,000 Myanmar men, women, and children crossed into the Indian state seeking refuge.

According to the official report, most of the Myanmarese who have sought refuge is from the Chin ethnic group, also called the Zo, who have the same heritage, ethnicity, and culture as the Mizos, who make up the majority of the state's 1.2 million tribal communities.

"The faces and physical characteristics of the local indigenous people and Myanmarese are identical. Language and other aspects of life are also similar. That is why, since January, we have been granting certificates of identity cards to these refugees," the Minister of the Interior stated.

"Temporary photo-affixed identity card is just for identification purposes and should not be used for any other official or non-official purposes, and that it is not transferrable. The identity papers would make it easier to deliver relief and other support to real Myanmar refugees," Lalchamliana said.

In response to reports in the media that the Mizoram administration has received financial assistance from the central government, the Home Minister stated that he is unaware of any assistance.

According to a senior Home Department official, the 26 Sub-Divisional Officers under the 11 districts have started granting identity certificates to refugees housed in those areas since January, following the state government's decision. The identity certificate includes the bearer's name, father's name, date of birth, place of origin, and current residence in Mizoram.

Following the arrival of Myanmarese in Mizoram (and a few in Manipur) in March of last year, the Union Home Ministry issued an advisory to the four northeastern states — Mizoram, Manipur, Nagaland, and Arunachal Pradesh which share a 1,640-km unfenced border with Myanmar, stating that the states and UTs have no authority to grant "refugee" status to any foreigner and that India is not a signatory to the UN Refugee Convention of 1951 and its 1967 Protocol. Notably, the Siaha district, located along the India-Myanmar border, is currently sheltering roughly 9,500 refugees, followed by Champhai, which is sheltering 7,900 refugees.

In Mizoram, some refugees are lodging with relatives. The Young Mizo Associations (YMA) and churches have set up 143 relief camps in various districts. Myanmar citizens sought refuge in all 11 districts of the state, with the Siaha district hosting the most people (8,381), Champhai (5,925), and Lawngtlai (5,925). (5,409).

Several delegations from Mizoram, led by Lok Sabha member C. Lalrosanga and Rajya Sabha member K. Vanlalvena, met with Union ministers in Delhi, including DoNER Minister G. Kishan Reddy and senior officials from the Home and External Affairs Ministries, to request official shelter and financial assistance for Myanmar nationals. Reddy had previously stated while speaking to Mizoram MPs that the Myanmar refugees should be treated as "tourists," not refugees.

Meanwhile, Mizoram chief minister Zoramthanga had written and spoken to Prime Minister Narendra Modi, pleading him to grant relief, needed aid, and sanctuary to Myanmar nationals, since the state government was experiencing a financial crisis due to the Covid-19 outbreak and other issues.