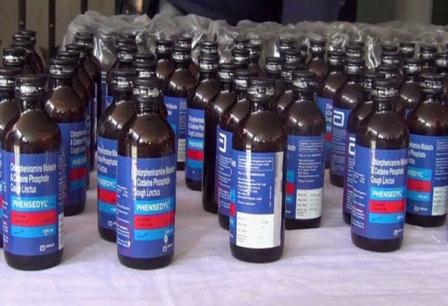 Dhubri: On Tuesday, nearly 8000 cough syrup bottles hidden inside mango boxes were caught in Chapar by the police authorities.

Chapar police raided a truck under the vehicle registration plate ( AS-01MC-9398). Following the raid, 7920 bottles of cough syrup were discovered inside the cases of various Mango bottles. All these cough syrup bottles are claimed to be illegal.

The police authorities have informed that the truck was heading towards Tripura from west Bengal via Dhubri.

“At first, the police thought that by mistake they had stopped the wrong truck, but suddenly police staff noticed that all the containers containing mango on top were secretly carrying Cough Syrup bottles underneath the boxes,” stated Dhubri SP Abhijit Gurav.

The cost of the material is expected from Rs 15 lakh to Rs 20 lakh. Abhijit Gurav, SP, Dhubri, suggested that a case has been recorded upon the arrested person following NDPS Act, and further inquiry will be made.

He additionally stated that the crackdown on narcotics and drugs would remain in the times to come.

Share
Facebook
Twitter
WhatsApp
Previous articleTokyo to host Olympics Games 2020 under state of emergency: Covid 19
Next article“Gorkha community residing in BTR area will be given the equal right which was enjoyed by the tribal people’: Minister Dr Ranoj Pegu