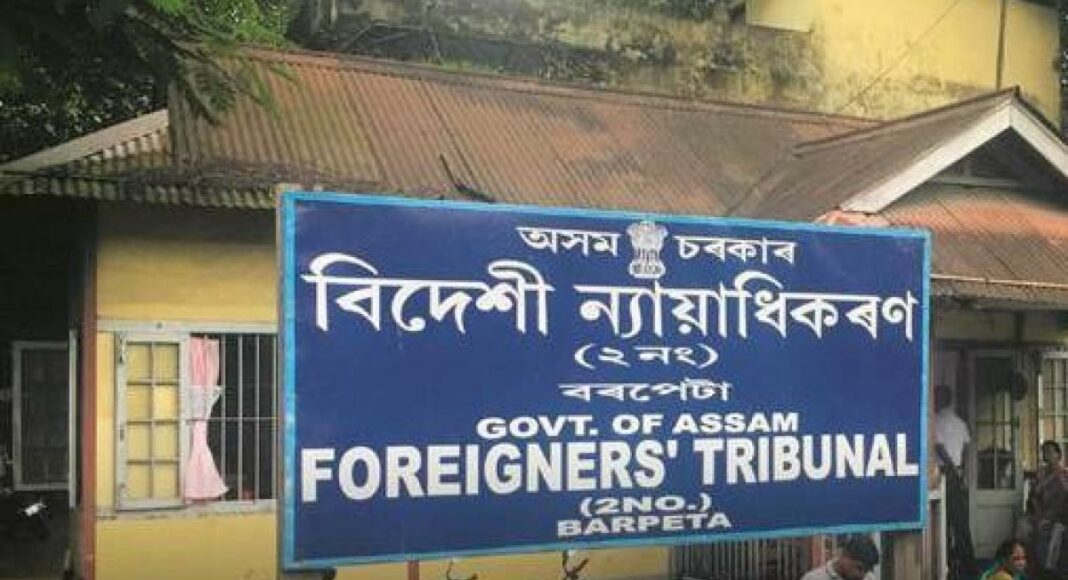 Guwahati: Assam Foreigners’ Tribunal (FT) recently declared that the National Register of Citizens (NRC) published on August 31, 2019, is the “Final NRC.” However, the NRC has not yet been published by the Registrar General of India (RGI).

While declaring a man as a citizen of India, the FT declared that even though the identity cards are yet to be released, “there is no doubt that this NRC Assam issued in 2019 is nothing but the final NRC.”

“This legal status is still in force, and the National Identity Cards have yet to be assigned to the citizens whose names have been added in final NRC,” Sishir Dey, member FT stated.

Sishir Dey, a member of FT-II, gave the rule in a “D voter” (doubtful voter) case against one Bikram Singha of Jamirala village in the Patherkandi police station area of the district.

In May 2008, the Assam police’s Border wing had registered a case against Bikram Singha as ‘D-voter.’ Singha remained untraced until June 28, 2021, and appeared before the Foreigners’ Tribunal-II (FT-II) in Karimganj town two months later, seeking time to return from Bengaluru where he was working. Singha provided the FT-II with several papers to establish his Indian citizenship.

Singha provided a 1968 land record in his grandfather Madan Kumar Singha’s name. The proof also included a paper of his father Bharat Chandra Singha being an Indian Air Force employee for 29 years since 1972.

The prosecution lawyer, Shri Sankar Chakraborty, claimed that Singha had no record confirming that his family was residing in India before 1966.

In response, the petitioner’s advocate, Manjari Das, countered him by stating that the final NRC in Assam had been issued “as per direction and monitoring” of the Supreme Court and that there should “not be any doubt about finality or legality of NRC for Assam.”

“The names of other persons of his family in final NRC may be conclusive proof of their Indian citizenship,” the tribunal said, ruling in Singha’s favor.

Mr. Sishir Dey, Member FT, Karimganj, added that the Supreme Court had ordered for the development of the NRC in a time-bound method, whose latest step was considered as “Finalisation of final updated NRC” and the date for the fulfillment of the process was set on August 31, 2019.

Approaching the matter of whether the NRC has “attained finality or not” as proposed by the government advocate, the tribunal stated the NRC was prepared as per terms of the Citizenship Act, 1955, and the Citizenship (Registration of Citizens and Issue of National Identity Cards) Rules, 2003, and on the regulations of the Supreme Court.

In the order-cum-opinion, Dey stated that Singha’s name surfaced in the final NRC, published on August 31, 2019, which confirms his relationship with his grandmother, parents, and younger brother, whose names also appear on the list.

While it affirmed that it did “not necessarily and lawfully established his citizenship due to pendency of his case” and that “the NRC authority might not trace pendency of the case before the tribunal,” the names of family members in final NRC “may be conclusive proof of their Indian citizenship.”

The report published recently for petition No. 342 stated,” There is nothing adverse found on record against the OP to doubt the identity, relationship or linkage and the citizenship of the OP.”

The petitioner’s advocate, Manjari Das also stated that her client was a resident of India by birth under Section 3 of the Citizenship Act, 1955. To support the claim, he pointed to a White Paper on Foreigners’ Issue’ published by Assam’s Home and Political Department on October 20, 2012. According to it, those born between January 26, 1950, and July 1, 1987, can be considered citizens of India by birth, irrespective of the nationality of their parents.

The Foreigner’s tribunal opinion appears two weeks following the Assam government-directed FTs to adhere to giving “opinion” on a person’s nationality and abstain from giving any “consequential orders.”

The order followed a casual evaluation study of FT “opinions” by the state’s Judicial Department, which determined that the FTs worked outside their field and gave “consequential orders” while presenting an opinion.