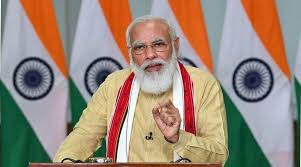 “The Dark Days of Emergency can never be forgotten. The period from 1975 to 1977 witnessed the systematic destruction of institutions. Let us pledge to do everything possible to strengthen India’s democratic spirit, and live up to the values enshrined in our Constitution,” the Prime Minister tweeted.

Prime Minister Narendra Modi launched a stinging attack on the Congress today over the 1975 Emergency saying the 21-month period “witnessed a systematic destruction of institutions”.

“This is how Congress trampled over our democratic ethos. We remember all those greats who resisted the Emergency and protected Indian democracy,” he added.

46 years ago, on this day, then prime minister Indira Gandhi had imposed the Emergency days after the Allahabad High Court found her guilty of electoral malpractices and disbarred her as a parliamentarian for six years.

Constitutional rights and civil liberties were suspended, the media was severely restricted, and many opposition leaders were jailed during the period that lasted till 1977.

The BJP often marks the anniversary of the Emergency as a “Black Day” and routinely attacks Congress on the controversial years, especially when faced with similar accusations of stifling freedom of speech and the right to dissent.

Indira Gandhi’s grandson and former Congress chief Rahul Gandhi in March called the Emergency a “mistake” and termed what happened in that period as “wrong”.

“I think that was a mistake. That was a mistake. And my grandmother said as much. But, the Congress at no point attempted to capture India’s institutional framework… frankly, it does not even have that capability,” he had said.