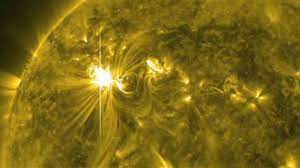 A very powerful solar storm is approaching Earth at a speed of 1.6 kmph. It is likely to disrupt phone and GPS signals upon impact. This can cause interference and disruption in the mobile phone signal, satellite TV, GPS navigation. Experts have also said that some places may see blown-out transformers if the current in power lines is high.

NASA has said in a statement that the solar storm is moving towards earth at a speed of about 1.6 million kilometres per hour. There is a chance that its speed may increase further.

According to a report by Spaceweather.com, the storm originated from the Sun’s atmosphere but full-fledged geomagnetic storms are unlikely. However, it could spark high-altitude auroras.

The Space Weather Prediction Centre of the United States has predicted that the solar flare is likely to be centred on a sub-solar point on the sunlit side of Earth. Latest predictions say the powerful flare can cause communication disruption and wide-area blackout of HF (high frequency) radio communication for an hour or more.

Besides the communication infrastructure on Earth, the satellites in the upper atmosphere may also get affected by solar flares.

“There is a Difference Between ‘Erotica’ and ‘Pornography’, My Husband is Innocent,” says Shilpa Shetty