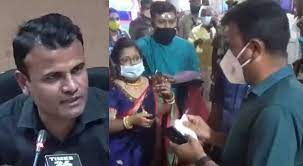 He had earlier made headlines following shocking visuals from a wedding raid where he was seen abusing his power, threatening people with arrest, and also allegedly thrashing a Hindu priest.

ALSO READ: Despite losing in Nandigram Mamata Banerjee can become the next CM of West Bengal, How?

Earlier this week, DM Sailesh Kumar Jadav appeared before a committee comprising of two senior IAS officers which was formed at the direction of Tripura Chief Minister Biplab Kumar Deb.

"It is my duty to enforce law and order and to prevent the spread of Covid-19. I stand by whatever I did that night," Yadav had told before the committee.