The death toll in Assam has surged to eight, with five lives lost in landslides.

Digital Desk: As floodwaters entered new areas of Assam, the number of affected people more than doubled to over four lakh since the previous day, while three more people died as a result of the disaster, bringing the total toll of dead people to eight, as per government report. 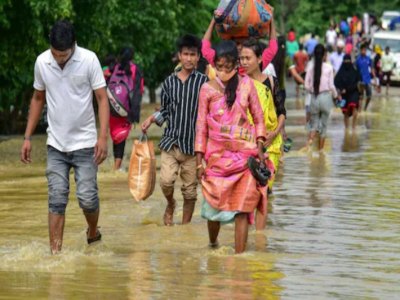 According to the Assam State Disaster Management Authority (ASDMA), the number of people affected has risen to 4,03,352 across 26 districts, up from 1,97,248 in 20 districts as of Monday.

Cachar is the worst-affected district till now, with 96,697 people affected, while 88,420 and 58,975 people are affected by the downpour, respectively.

The India Meteorological Department (IMD) has predicted a drop in temperature for the next three to four days beginning Monday, providing relief from the scorching heat.

In many parts of the national capital, the maximum temperature reached 49 degrees Celsius on Sunday as a scorching heatwave swept through North India.

According to an official statement on the decision of a high-level meeting, the Air Force has been directed to airdrop the most critical supplies to Dima Hasao beginning Wednesday.

Check out the most recent weather Update reports:

In the meantime, extreme heat constraints continued unabated in Haryana and Punjab on Tuesday, with maximum temperatures in most places hovering above normal limits.

According to the meteorological department, Gurugram in Haryana was the hottest place, with a high temperament of 44.5 degrees Celsius.