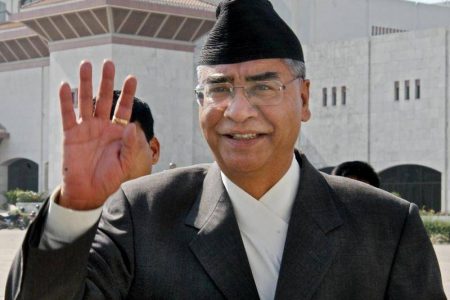 Kathmandu: For the fifth time, On Tuesday, the prime opposition leader of Nepal, Sher Bahadur Deuba was sworn in as the new PM of Nepal.

It was a day following the country’s most formidable court removed his predecessor following months of political agitation.

Still, the swearing-in ceremony was deferred by hours due to a conflict between Deuba and the President’s office concerning the content of the letter of approval.

“The President has appointed Sher Bahadur Deuba as the Prime Minister as per the verdict of the Supreme court yesterday (Monday),” a report declared by President Bhandari’s office had initially stated.

However, Bhandari was later made to issue another letter in which the associated article of the Constitution under which the appointment was being made was considered.

The second letter appeared following Deuba’s emphasized he would not take the oath of office without the change being offered in the initial letter. It took more than three hours for the matter to be solved.

A five-member Constitutional Bench of the Supreme Court, in its order on Monday, had said that Deuba must be appointed the Prime Minister in line with Article 76(5) of the Constitution.