IPL 2022: Scoreless MI to face a great challenge against KKR in the upcoming match on April 6 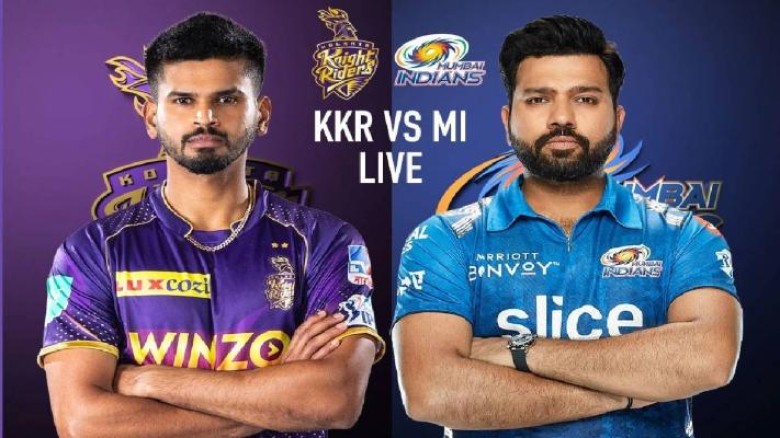 The biggest asset for KKR this year, Andre Russel, is coming back with great form, whereas MI's pacer Basil Thampi and spinner Murugan Ashwin are proved as feeble for the match.

Digital Desk: Being the IPL's five times champions, Mumbai Indians (MI) have lost their opening games this year; the first was against Delhi capitals, where MI lost by 4 wickets and the next defeat by Rajasthan Royals by 23 runs.

Let's see, facing such a tough situation, will Mumbaikars (MI) be able to revive their position in the tabletop of IPL 2022.

Mumbai Indians' domestic bowlers will try to improve when they face Kolkata Knight Riders as their strongest team in the IPL and looking to avenge their back-to-back losses on April 6.

KKR came in the tabletop list by defeating their rival Punjab Kings by six wickets; on this, Mumbai Indian's skipper Rohit Sharma will look for improvements on numerous fronts to help the team turn things around.

MI's pacer Basil Thampi and spinner Murugan Ashwin have been a stumbling block, allowing 73 runs in three overs during RR's innings, and the duo will need to improve on Wednesday.

Australian seamer Daniel Sams, who has gone wicketless in the last two encounters, went for runs.

If they are to restrain the KKR batsmen, the three will need to immediately recover from their lacklustre game against RR and bowl in the proper spots.

Jasprit Bumrah, on the other hand, demonstrated why he is the finest in the business with his three-for, particularly towards the death, and MI will be expecting another outstanding performance from him.

Rohit will have to be at his best and pound his favourite opponent against whom he has a strong record to make a comeback.

Ishan Kishan has been a rock-solid opener, hitting a stunning 81 in the lung-opener and then a ferocious 54 in the second.

Suryakumar Yadav, famed for playing numerous match-winning innings for the franchise, has been sorely missed.

Yadav has healed from his finger injury, but it is unclear whether he will play or not, as Rohit has been evasive about his availability.

Anmolpreet Singh, Tim David, and West Indian Kieron Pollard, for example, will have to take responsibility.

Kolkata's most valuable asset is renowned all-rounder Andre Russell's return to form. His six-hitting skill was on display against the Punjab Kings, and he'd like to pick up where he left off.

However, their top-order, including Ajinkya Rahane and Venkatesh Iyer, struggled against Punjab, and the two will be looking to get the team off to a solid start.

Shreyas Iyer, the skipper, has been receiving starts, but he needs a huge score. Sam Billings is in the same boat. Finally, Nitish Rana hasn't been at his best and needs to come out swinging.

Umesh Yadav of the KKR has been brilliant and could threaten the MI batsmen, but he will require help from Tim Southee and Shivam Mavi, while Varun Chakravarthy and Sunil Narine's eight overs can transform the match position.

Mumbai Indians have won 22 games against KKR, while KKR has won only seven, and they will be looking to add to their tally.

The match will take place on April 6 in Maharashtra Cricket Association Stadium, Pune, at 7:30 pm.