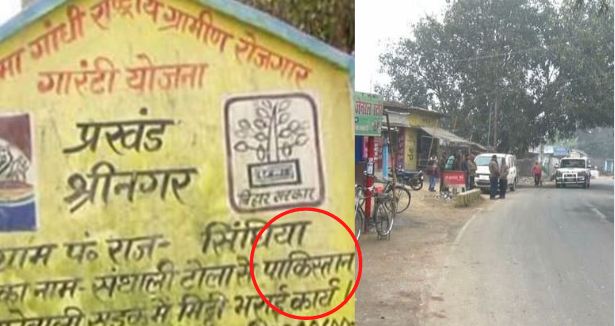 PURNIA: The Pakistan that has no Muslims. You might be thinking how could this be possible? Yes, though it sound strange, it is in fact true.

Pakistan is a village in Purnia district in Bihar. It is named after the country of Pakistan in memory of its Muslim residents who migrated to erstwhile East Pakistan (present-day Bangladesh) after the Partition of India in August 1947.

Although the village’s district shared a common land border with what was East Pakistan at the time of partition, its present-day Purnia district does not border Bangladesh.

The village today does not have any Muslims or mosques and is mainly populated by Hindu tribals.

While remaining in India itself, Purnia was in close proximity to the newly-created exclave of East Pakistan, prompting many Muslims to migrate there.

Before their departure, the Muslim residents handed over their property and other assets to their Hindu neighbours, who subsequently renamed the village “Pakistan” in their memory.

Prior to the Indian States Reorganisation Act of 1956, the district of Purnia shared a land border with East Pakistan, which ceased to exist after Islampur sub division was transferred to the state of West Bengal.

The village lies some 30 km from Purnia, the district headquarters, and is located in Srinagar Block.

Following the Partition of India in 1947, the village ceased to have any Muslims; the inhabitants of the village today are Hindus.

The village today is poverty-stricken and reportedly lacks basic facilities including roads, schools and hospitals.

The literacy rate of the district as a whole is 35.51 per cent.

Residents of neighbouring villages refer to the people of Pakistan village as “Pakistanis” and, due to the local stigma associated with this term, refuse to allow women to marry men from this village.

There have been requests submitted to rename the village to “Birsa Nagar”,although the submissions have not been acted on by the government.