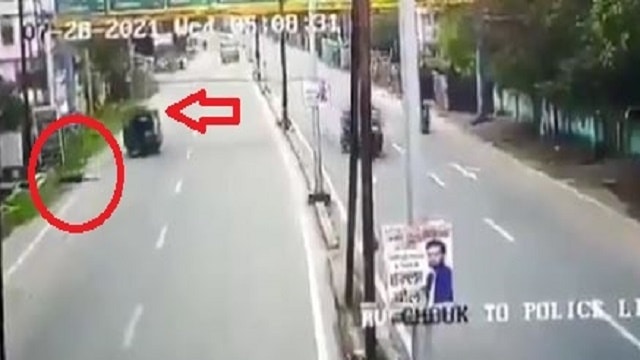 New Delhi: The death of a judge in Jharkhand on Wednesday in what was initially believed to be a hit-and-run has taken an alarming turn with security footage of the incident pointing towards murder

As the incident was raised in the Supreme Court today, Chief Justice of India NV Ramana said that he has spoken to the Jharkhand High Court and would not like to step in at this stage and assert: “We are aware of the case and we will take care.”

Judge Uttam Anand was on his morning run yesterday when he was hit by “an unidentified vehicle” just half a km from his home in Dhanbad, according to the police.

CCTV footage shows the judge jogging at around 5 am on a deserted stretch of road as a tempo takes a turn and appears to go straight for him. The tempo rams the judge and drives off.

Judge Anand was found lying on the road, bleeding, by a man who happened to pass by the road and who then later took him to the hospital. The judge was declared brought dead, as reported by the doctors.

His family reported him missing when he did not return at 7 am. The police finally tracked him down to the hospital and established him as the man who had died in the accident.

The police say the CCTV footage makes it clear the tempo hit him deliberately. Investigations have revealed the vehicle was stolen just a few hours before the judge was hit. The clip circulating on social media spurred calls for a bigger investigation.

The driver of a tempo that hit District and Additional Judge Uttam Anand in Dhanbad has been arrested along with an associate, the police say.

The police are focusing on Judge Anand’s cases. He had been handling many cases of mafia killings in Dhanbad town and had recently rejected the bail requests of two gangsters.

“The High Court Chief Justice has taken up the issue and the case is now with the High Court. We are aware of the case and will take care of it,” Justice Ramana said.

Earlier, raising the incident before a bench led by Justice DY Chandrachud, lawyer Vikas Singh had said: “It is a brazen attack on the judiciary. This is a matter which should go to the CBI. The local police are usually complicit in such matters. It is shocking. A judge is on a morning walk and is hit by a vehicle. He was dealing with bail applications of gangsters. This is an attack on judicial independence.”

Who shot the video, questioned Justice MR Shah. Lawyer Vikas Singh said the footage was “not normal CCTV” and was recorded “deliberately” for circulation. “This is very brazen. They want to record it and circulate it. It’s not just any CCTV camera because you can hear voices while that is being recorded,” Mr Singh told Justice Shah.

Justice Chandrachud said he would inform the Chief Justice.

The Chief Justice added: “If we interfere at this state it will hamper the probe.”