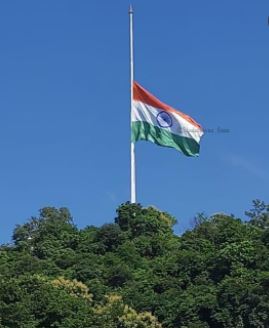 The Assam government has declared state mourning for three days starting from Tuesday, July 27, 2021, as a mark of respect for the five police personnel and one civilian who lost life in the Assam-Mizoram border clash on Monday.

During this period, the national flag will fly at half-mast and there will be no public entertainment, the order issued by the General Administration Department said. At least six persons were killed and 60 others, including an SP, injured in a bloody clash along the Assam Mizoram Boarder on Monday.

Union Home Minister Amit Shah has spoken to the chief ministers of Assam and Mizoram, Himanta Biswa Sarma and Zoramthanga respectively, and urged them to ensure peace along the disputed border and find an amicable settlement.

In a statement released Tuesday by the Joint Secretary to the Government of Assam, it said, “The state government of Assam expresses its profound sorrow at the sad demise of five nos. of Assam police personnel and one civilian at Lailapur of Cachar district while defending borders of Assam on 26th July. As a mark of respect to the departed souls, the government of Assam has declared state mourning for 3 (Three) days, w.e.f. 27.07.2021…’

Sarma paid floral tributes to the five slain policemen at Silchar on Tuesday.