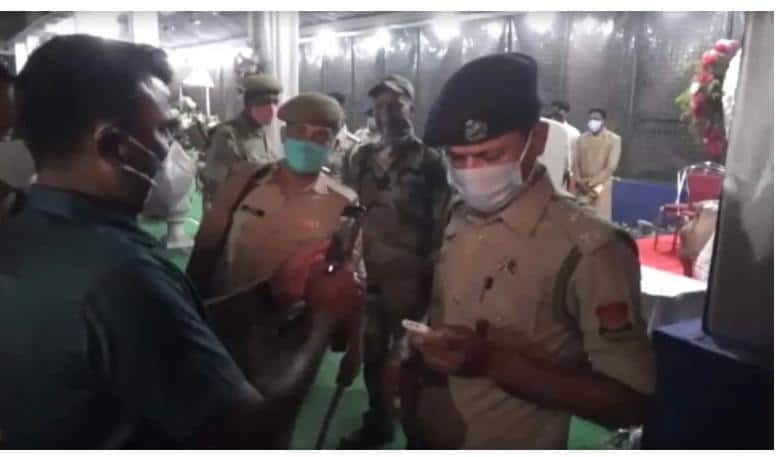 Agartala: Tripura Chief Secretary, Manoj Kumar, in an order imposed a night curfew in Agartala Municipal Corporation area from 10 pm to 5 am from Thursday onwards because of coronavirus. The order said that in closed spaces, a maximum of 50 percent of seating, while in open spaces, a maximum of 100 persons would be allowed and higher numbers may be allowed based on the size of the ground with a ceiling of 200 persons.

District and police officials said that after getting the information said that after getting the information of the violation of the night curfew regulations, the Tripura district magistrate Shailesh Kumar Yadav raided two marriage halls where a large number of people comprising men, women, and children attended the marriage ceremony late on Monday night.

The police detained 31 people including 19 women for violating the orders given by the government. Also many escaped when the police resorted to a mild Lathicharge

“All these people are highly educated but they did not follow the norms amidst the alarming rise in the coronavirus cases. These same people on the other hand will accuse the government of doing nothing. I also suggest suspending the officer-in-charge of the West Agartala police station,” the IAS officer stated.

Meanwhile, some people, including BJP MLAs, accused the DM of high handedness while enforcing the orders. “The DM physically harassed and abused the priests at the marriage ceremony, bridegroom and others,” BJP legislator Sushant Chowdhury said on his social media posts.

Share
Facebook
Twitter
WhatsApp
Previous articleDoctor, nurse slap each other after argument over death certificate
Next articleFour dead including two minors in a major road accident