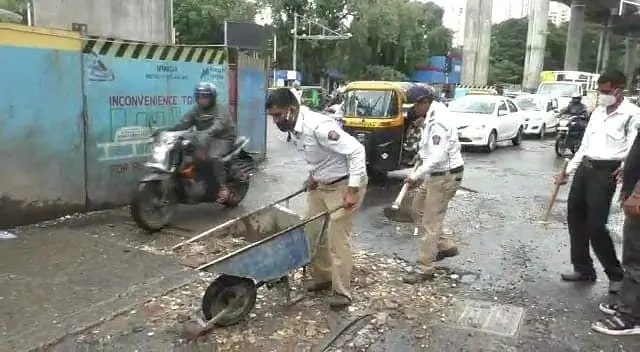 Negligence of the Brihanmumbai Municipal Corporation (BMC) in filling the potholes in the Mulund area resulted in two traffic policemen swinging into action and doing the deed instead. The incident occurred around Tuesday noon when two traffic constables took the spades and filled the potholes to ease the traffic congestion at Mulund Check Naka.

According to a senior traffic official, a huge queue of vehicles causing congestion was reported on Lal Bahadur Shastri (LBS) road near Maharana Pratap Chowk in Mulund. When two constables attached to Mulund traffic division Sanjay Wagh and Sahebrao Chavan, reached the spot to inspect, they observed that two major potholes right in the middle of the LBS Road were causing congestion.

The constables alerted the control room and informed the BMC T-ward as well, but to no avail. There was ongoing work of a bridge nearby with the materials present on the spot, but the workers were not there amid heavy rain. Traffic constables Wagh and Chavan then decided to fill the potholes themselves and took the debris of the bridgework, put it in the carrier, and filled the potholes.

“We informed the T-ward of the BMC and told them that if they don’t address the issue, we will be compelled to do it ourselves. On Tuesday when there was a major traffic snarl, our personnel did the needful and got the pothole-filled to ensure there is a smooth vehicular movement,” said Narendra Talegaonkar, senior inspector of Mulund traffic division.

Northeastern states to be demarcated through Satellite Imaging, to settle the Inter-State Border Dispute, Reports

Saturn will come Closest to Earth on August 2

Chief Minister Pinarayi Vijayan to launch Sahajeevanam for the differently-abled