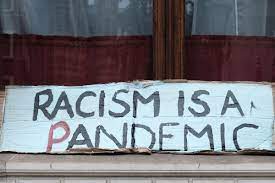 The UN taking cognizance of the recent judgement on George Floyd’s murder case drafted a report on the rising case of racism highlighting the necessary steps to bring a stop on such cases.  The report suggests to  bring a complete ban on “impunity” enjoyed by police officers in such cases.

The UN human rights office analysis of 190 deaths across the world led to the report’s damning conclusion that law enforcement officers are rarely held accountable for killing black people due in part to deficient investigations and an  unwillingness to acknowledge the impact of structural racism.

The UN human rights 0ffice was tasked in June 2020 to produce a comprehensive report on systemic racism against black people. The report investigated violations of international human rights law by law enforcement, government responses to anti-racism peaceful protests, as well as accountability and redress for victims. The report was led by Michelle Bachelet, the UN high commissioner for human rights and a former president of Chile.

Bachelet described the status quo as “untenable”. She said: “Systemic racism needs a systemic response. There needs to be a comprehensive rather than a piecemeal approach to dismantling systems entrenched in centuries of discrimination and violence.

“I am calling on all states to stop denying, and start dismantling, racism; to end impunity and build trust; to listen to the voices of people of African descent; and to confront past legacies and deliver redress.”

Wendy Clarke, Kevin Clarke’s mother, told the UN commission: “We want to see accountability, and real change, not just in training, but the perception and response to black people by the police and other services. We want mental health services better funded so the first point of response is not just reliant on the police.”

Investigations, prosecutions, trials and judicial decisions often fail to consider the role that racial discrimination, stereotypes and institutional bias may have played in deaths in custody.