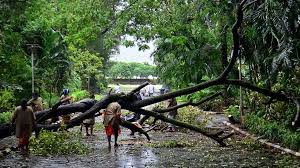 Goa on Friday was hit by intense rainfall and its worst floods in decades that submerged roads and bridges, damaged homes and property worth crores, and forced the evacuation of more than 400 people. Two trains were also derailed by a landslide and an overflowing river.

The India Meteorological Department had initially issued a red alert for extremely heavy rainfall on Thursday and an orange alert for Friday. By Friday afternoon, however, IMD upgraded the alert to red. It forecast heavy rainfall for the next three days.

Chief Minister Pramod Sawant said that the state was seeing flooding of this magnitude for the first time. No casualty was reported despite the vast destruction, he said, but added that a woman was suspected to have drowned in Dharbandora in South Goa.

“There has been a massive flood in Goa. It is like never before. There has been large-scale damage to people’s homes and agricultural land,” Sawant said on Friday.

Later on Friday evening, Sawant wrote in a tweet that Prime Minister Narendra Modi had “called to inquire about the safety and well-being of the people in the prevailing flooding situation in Goa due incessant rains”. The PM has assured full support and assistance to the state, Sawant wrote.

“Many people had to be evacuated because of the flooding. We have taken the help of the Navy and the port authorities too. We had to rescue some people using rescue boats. Our teams have been working since last night to move people to safety. The (400) evacuated people from the five talukas have been housed in government primary schools and we have made arrangements for their accommodation and food,” Sawant said.

The Chief Minister, who visited various flooded areas on Friday morning, said the damage to property has been worth crores of rupees and people have lost their homes. “The market in Usgaon is submerged. This kind of flooding was not even seen in 1982 (the last major flood in the state).” Nearly 700 homes in the state had been damaged, government officials said.

The State Directorate of Fire Services and Emergency Services that moved several people to safety in the inundated villages of Sattari through boats also reported that 30-40 cows from a Gaushala in the Nanus village of Sattari were missing after the shelter was submerged.

On Friday evening, the IMD warned about moderate to intense spells of rain in parts of the state and also stated that the expected impact could be possible mudslides in hilly areas, swelling of rivers, flooding, disruption of municipal services and collapse of weak structures.

Goa deputy chief minister and agriculture minister Chandrakant Kavlekar said that 832 hectares of agricultural land across the state was damaged by the flooding and the loss is estimated to be worth Rs 2.5 crore. Banana and rice plantations in several parts of north Goa were flattened by incessant rain.

The Indian Navy mobilized flood relief rescue efforts for Maharashtra, Karnataka and Goa. Naval Advanced Light Helicopter was launched from Goa. It provided aerial support in rescue efforts in Karwar and a sortie was made to Ganjem near Ponda to check and verify receding water levels, a navy said in a statement. The Goa Coast Guard also carried out four helicopter sorties and dropped 200 food packets to people stranded in the floods.