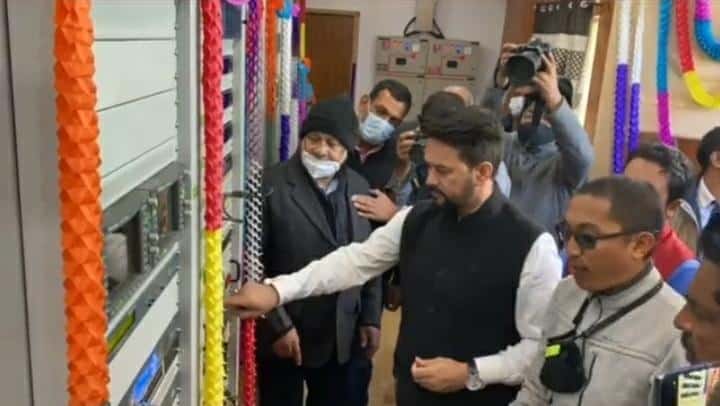 The ministry informed that the 10 KW transmitters are the highest altitude TV and Radio transmitters in the country, located at the height of 4054 metres above the mean sea level. The transmitters at Leh are at the altitude of 3501 metres (about 11,450 ft).

Claiming that the transmitters would cover a population of about 50,000 in the remote border area of Kargil, Minister Thakur said, “The number may look small compared to other parts of the country, but it demonstrates the commitment of Government of India to reach each and every citizen in the border areas.”

The Minister also announced that the Ladakhi contribution to DD Kashmir will be doubled from 30 minutes to one hour daily from 1st Oct 2021.

He said that the border coverage by strong signals of radio and television is an important aspect of the broadcasting policies of the government.

The Minister added that it is not only required for providing correct information to the people in the sensitive border areas of Jammu and Kashmir and Ladakh but also to counter the propaganda from the hostile neighbours.

Speaking on the occasion Sh. J. T. Namgyal, Member of Parliament from Ladakh said that the new transmitters show the centre’s commitment towards the development of the region.

In order to make TV and Radio channels accessible to common people, Prasar Bharati is making available over 160 TV channels across different genres including news, entertainment, education and 48 Radio Channels free of cost to DD Free Dish households at no monthly fee, the Information, and Broadcasting Ministry said.

Breaking: One dead after fire breaks out at Mumbai high-rise