UP: bodies found in 2 cars after Ganga Canal was desilted 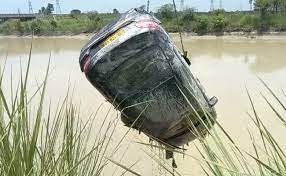 Two bodies – 55 km apart – were fished out from the Ganga canal in western Uttar Pradesh’s Muzaffarnagar during a desilting process.

Desilting is the removal of fine silt and sediment that has collected in a river, or a water body, to restore its natural capacity.

The bodies have been identified and the families informed. A probe is underway, the police said.

Dilshad Ansari, 27, who had been missing since January, was found in the backseat of the car, which sources say was borrowed from a friend. The man, a resident of the Baghra area in Muzaffarnagar, was identified through his driving license.

The second body, of Harendra Dutt Atre, was found in the Sikheda area, 55 km away, from the spot where Mr. Ansari’s body was found.

Mr. Atre had been missing since February.

“The family has been informed after identifying the body. Further investigation is being conducted and action will be taken accordingly,” said Deputy Superintendent of Police.

Share
Facebook
Twitter
WhatsApp
Previous articleMulti Commodity Exchange: Gold prices surge, traded at Rs 47,091 per 10 gm
Next articleWoman jumps along with her son from the 12th floor of her home