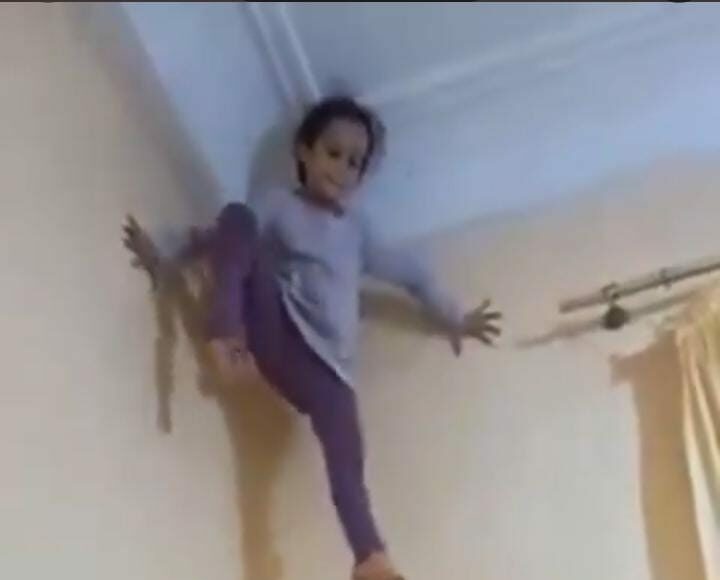 In the 55-second clip, the girl aged around 5, easily climbs walls in minutes without any assistance. The girl uses her arms and legs to easily climb the high wall at her home without the support of a harness or security equipment.

In the video, she initially stands in the corner of a room and sets her hands and bare feet next to the two walls. She then strengthens herself within the two walls and picks her body up to the roof. When she reaches the wall ceiling, she places both her legs in the air and conveniently chills for some seconds.

This shocking yet eye-catching video takes rounds on social media platforms. It has garnered more than 1.37 lakh views covering 3,000 likes and more than 600 shares. Netizens were shocked to see the girl’s strength to climb the wall without any safety measures.

Commenting on the video, one user wrote, “Had she crawled up over the ceiling… trust me mate… I would have called up an exorcist.” Another wrote, “I love that, she must have magnetic or sticky hands and feet. It’s strange and incredible.”

Another user posted, “Imagine waking up in the middle of the night to this. I’d be on medication for the rest of my days.” Yet another commented, “Obviously demonic possession.”

Several comments and posts are being made on different social media platforms concerning the viral video. The meme makers got an amazing highlight for their works. While some users were surprised by the video, some are creeped out after watching the video.

Let’s have a look at some of the comments and posts linked with the viral video:

Breaking: One dead after fire breaks out at Mumbai high-rise