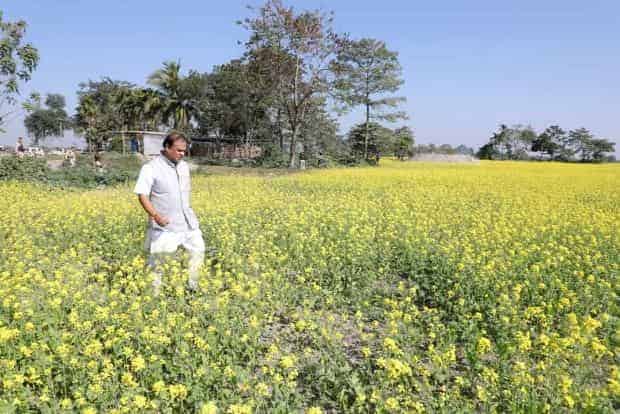 Darrang: Walking through the fields of Dholpur’s mustard fields in full bloom while reviewing the Gorukhuti Project, Assam Chief Minister Himanta Biswa Sarma visited the agricultural fields and piggery while appreciating the farmers for their efforts and helping the government in realizing the dream of Assam’s agriculture resurgence.

During his visit, CM Sarma even interacted with the farmers and inaugurated the Erosion Protection Project at Moranoi at Dholpur. The scheme will protect the area from river erosion while minimising damages.

While announcing multiple other schemes under the Gorukhuti Agriculture Project, Himanta Biswa Sarma said that the people of Gorukhuti will see a revolution in the field of agriculture and agri-based activities as this project will transform the look of the entire region which has been lacking from agriculture advancement.

“Gorukhuti project is a great opportunity for our youth to take up dairy & agriculture. They must dedicate themselves to agriculture and take control of our farmlands occupied by illegal infiltrators for so long,” added CM Sarma.

While at Dholpur, CM Himanta Biswa Sarma laid the foundation stone of Dholpur Bhagawat Namghar & interacted with Agro Soldier volunteers engaged in Gorukhuti Multipurpose Agriculture Project. He handed over a donation of Rs 1 crore to the Namghar.