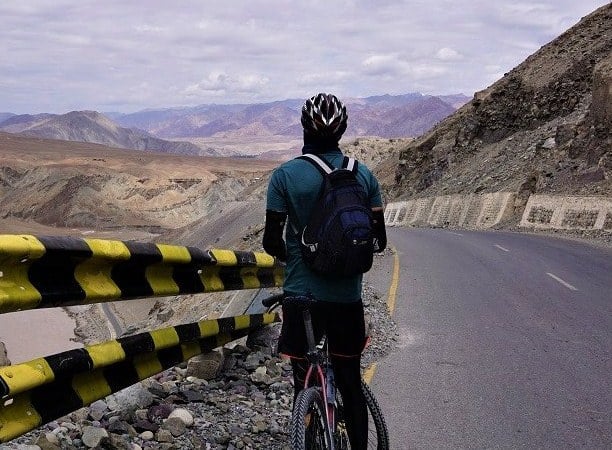 Hyderabad: Join your hands in appreciation for the differently-abled cyclist who has set his goal to take the journey towards Ladakh. Meanwhile, he has covered his ride till Hyreabad from Kerala.

A 35-year-old man, Mohammad Ashraf, a resident of Thrissur in Kerala, is all determined to create a historic cycling voyage. He is motivated to cover around 3,7000 km.

He has begun his journey on July 15 and on Sunday he has reached Hyderabad, which itself seems like a pre victory.

While addressing media, the brave soul Ashraf stated that he had earlier met an accident that severely injured his right leg causing paralyzed.

Determination is always the rising up call for individuals’ will and Ashraf’s determination to continue his cycling passion brings hope among many.

He said, “My disability is my ability, and I want to show the world that nothing is impossible.”

Presenting his early life, the will fond cyclist said “I met with a bike accident in 2017, and it took nine surgeries and years in the hospital to recover. I can use only one leg to pedal and only a few fingers of my right hand, but that is no deterrent to my journey.”

However, depression and anxiety turn out as the best mates during hardships. Similarly, Ashraf started removing the clutches of his anxieties by practicing cycling from April last year. It made him a wanderer of mountains and blue sky.

Soon, he has aimed to reach Khardung La, which is one of the most remarkable routes worldwide for riders and tends to have a height of 17,582 feet. Initially, he started his practice session by riding around 100-150km in a single day.

When asked regarding getting an artificial leg, he stated that he had lost most of his family savings throughout his treatment and cannot tend to ask for more. He has expressed his desire to raise help from the public once he completes his journey and aims to reach his destination Ladakh.

One needs to fall once, twice, or several times unless one reaches the ultimate goal of their life. There is no way that can stop a soul from what he actually desires to do. The world is a wish-granting factory for those who believe in their willpower.