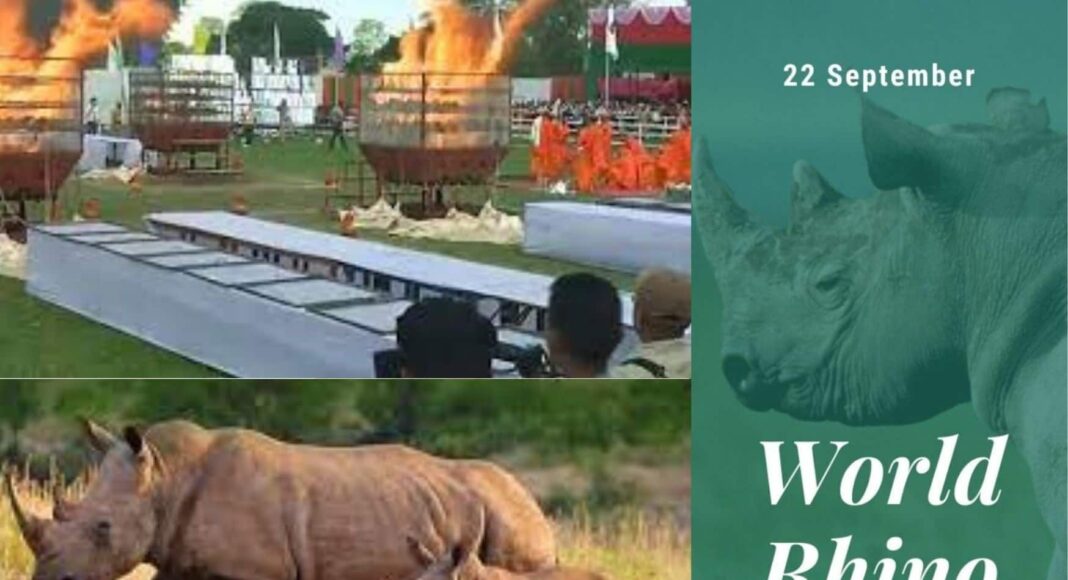 Guwahati: Every year, September 22 is observed as World Rhino Day all around the globe. This year on the occasion of World Rhino Day. the Assam government took out a special drive to create awareness on rhino poaching.

The Assam government decided to burn around 2,500 Rhino horns. All these rhino horns and other parts of rhino bodies were cremated today to create awareness among the poachers and people.

The State government took this approach to deliver a message to the poachers that the therapeutic qualities of the Rhino’s body are merely a myth. World Rhino Day highlights attempts to expose the myths and halt the market for the illegal trade of rhino horns.

Today around 6 am, the horns were taken out, and from 6:30 am, they were divided separately for burning and preservation. The horns were scanned and arranged for a webcast so that the world could see it sitting back at their home.

All the rhino horns set for burning purposes were seized from poachers who killed the endangered species for smuggling purposes.

“We have guaranteed that even the leftover ash of the horns after burning is correctly disposed off. As you know, in some prevailing therapeutic applications in China, the ash is supposed to be used, and thus the smuggling takes place. The ash will be cast in cement, and we have chosen to sculpt a life-size rhino of the ash concrete cast. It will need time. Still, the casting shall start tomorrow, and the Rhino shall be treasured in the museum.” Yadava stated.

Assam chief minister Himanta Biswa Sarma tweeted, “On #WorldRhinoDay2021, I shall join my esteemed colleagues in a program aimed at Busting Myth About Rhino Horns, and Public Destruction of Largest Stockpile of Horns of Greater One-Horned Rhinos. Today, 10 am Live on: https://www.360sslpl.com/rhinohornburning.”

Assam CM Sarma addressed the cremation event and said, ” If we do not burn these rhino horns and rather bury them along with the body. The poachers will once again dig the bodies of the rhinos and cut off the horns for smuggling purposes.”

He added, ” People used to ask me about selling these horns and earning a good resource for the state. But, we can also earn by selling human kidneys, and if that is considered as unlawful, then trading animal body parts is also illegal.”

In general, the day celebrates all five varieties of Rhino: Black, white, greater one-horned, Sumatran, and Javan rhinos. The day was announced as World Rhino Day by World Wildlife Fund (WWF) in 2010.

Assam is known for its Kaziranga National Park, which is famous for owning one-horned rhinos. Therefore, this year Assam took a major step in creating awareness among the poachers and people to preserve these species.

“Some species of rhinoceros are among the world’s most endangered animals, threatened by both habitat disaster and poaching,” explains the official website of the United Nations Environment Programme (UNEP).