2-day march against AFSPA: The voice of dissent and the silent regime 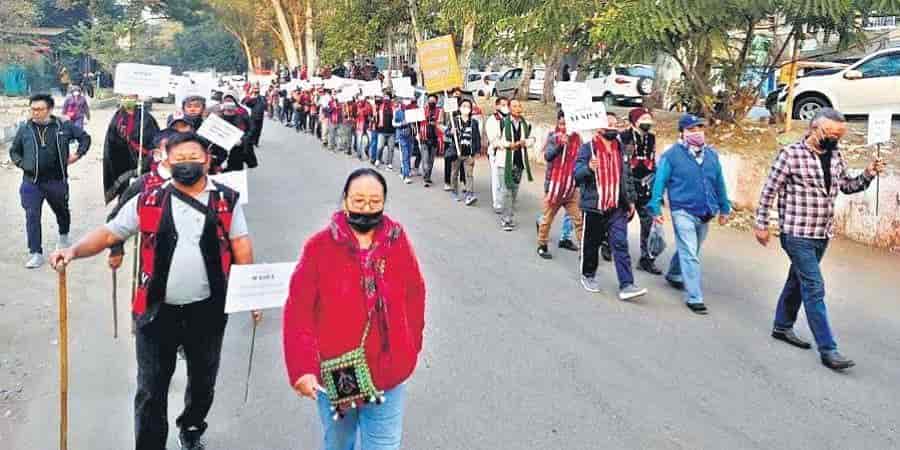 Digital Desk : Holding placards and banners in hand, raising slogans against the central forces while seeking justice for the 14 victims who were killed in Nagaland’s Oting village, hundreds of Nagas began a two-day walkathon on Monday to cover a 70-km distance from Nagaland’s commercial hub Dimapur to state capital Kohima. The peaceful protest was pioneered to demand the repeal of Armed Forces (Special Power) Act, 1958.

Spearheaded by various Naga Civil Society organisations, the two-day walkathon looks forward to a massive social campaign that has been gaining momentum in the past few weeks since the firing incident in Oting Village.

The Armed Forces Special Powers Act (AFSPA), has been entitled as a draconian law, which draws its rules and legislations from the British era. The Act provides certain special powers to the Armed Forces which was first promulgated by the Britishers to suppress the Quit India movement in 1942. After independence, then PM Jawaharlal Nehru decided to retain the Act. It was then brought in as ordnance first and later notified as an Act in 1958.

The AFSPA, which grants powers to Armed Forces to freely act, whether arrest, kill or question any citizen from an ‘ordained disturbed area’ as per government’s lingo, has been a contentious issue in the Northeastern states, especially Nagaland where after the Mon district firing, the people have been demanding the repeal of the AFSPA.

The walkathon initiated by the Civil Society organizations of Nagaland and Northeast states that the protest is peaceful, silent and carried out on democratic lines, conveying the resentment of the people against the AFSPA and protect the dignity of the Nagas as human beings.

The central government announced the extension of the AFSPA in Nagaland for another 6 months, causing widespread resentment among the people of Nagaland, who have been demanding the revoke of the Act.

Multiple agitations demanding the Act’s repeal as well punishment for the security personnel who were involved in the botched operation at Mon district firing have been raging across the state of Nagaland.

Carcasses of migratory birds found in this state of Northeast, investigation underway