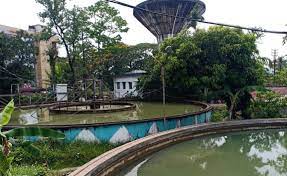 Silchar: Amid Assam Assembly Election counting in Silchar, a piece of news got viral into social media like a holocaust. Within few hours, people started having conversations on this topic as the most crucial news of the day.

The viral message was regarding a dead body inside the water reservoir of the Silchar Water Supply Scheme at Sadarghat. Staffs of the department were busy with the counting for the Assam Election which made it difficult for them to provide immediate verification to the people.

On Monday Tapan Sharma, Executive Engineer of Silchar acquainted that, "A message stating that a dead body of a person is found in the water reservoir of Silchar Water Supply Scheme at Sadarghat has been in wide circulation. But this is an unfounded and sheer rumor."

The Executive Engineer of the department further said "Immediately after the information reached us, we conducted a thorough investigation of the different units of Water Supply Scheme, but nothing untoward as such was detected. The Silchar Water Supply Scheme is running as usual."

The officials also make an appeal to the people for not considering every message on media as true. And also request the public to contact the concerned department for verifying any issue.