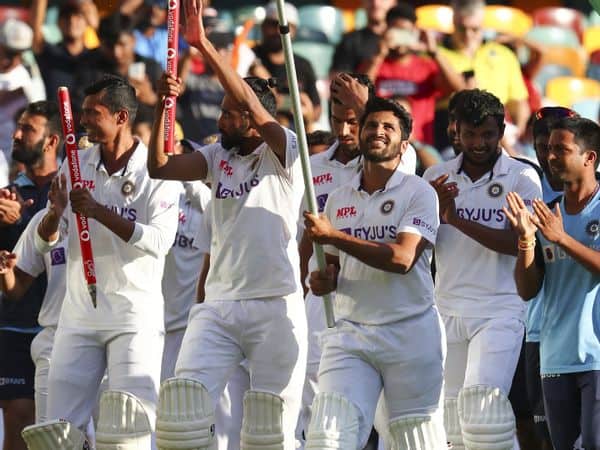 Sydney: India scripted a memorable series in the history of Test cricket after our Indian Cricket Team witnessed a barrage of health issues, yet standing tall amidst the adversities and finally retaining the Border-Gavaskar Trophy.

India pulled a three-wicket win over Tim Paine’s men at the Gabba. The highlight of the day for India was ‘The Rock’ Cheteshwar Pujara’s resilience along with fearless approach from youngsters – who toyed with Australia’s world-class bowling attack. Towards the end it was Rishabh Pant who held on to his nerves and guided Ajinkya Rahane & Co. to a thrilling win with a memorable 138-ball 89*.

With India still trailing by 100 runs after Pujara's dismissal, Pant took charge of the proceedings and produced one of the best knocks in the history of Test cricket. Instead of playing for a draw, Pant and Washington Sundar (22 off 29) got into limited-overs mode to stun the Aussies at the Gabba towards the final overs - which has been a fortress for them for the last three decades. It's for the first time in 32 years that the Australians lost a Test match at The Gabba.

The final day did not start on a good note for Ajinkya Rahane and his men as Pat Cummins struck early to remove Rohit Sharma (7). Only playing his third Test match, Shubman Gill then took the attack to the opposition with a well-crafted 91. Gill and Pujara brought India back in the game with a brilliant 114-run stand for the second wicket.