Kolkata woman sets her father on fire after dinner 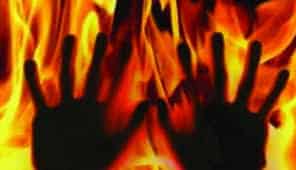 A 22 year old woman from Kolkata went out to dinner at a restaurant with her father on Sunday. According to reports, the daughter got her father drunk after dinner and later they went to the Chadpal Ghat on Strand Road for a stroll.

A few minutes into the stroll, the 56 year old father fell asleep as they were sitting on a bench, talking, near the banks of Hooghly River. As soon as the father fell asleep, the 22 year old woman poured kerosene on him and immediately set him on fire.

The entire incident was caught on a CCTV camera near the location of the incident.

The incident came to light after the woman’s uncle went to the police. The woman, a resident of Christopher Road near Park Circus, confessed to the crime.

“During interrogation, she claimed that after her mother died when she was a child, her father started physically assaulting her and also used to torture her emotionally. However, it stopped after she got married. But, as her marriage broke off and she returned home, the torture started again,” said a senior police officer.

The police are verifying her claims and the woman has been sent to custody till Match 29.