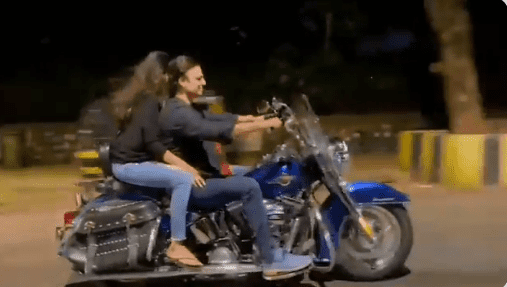 Mumbai: A video shared by Vivek Oberoi has invited police action as the actor was charged for allegedly violating traffic rules after the video showed that he was not wearing a helmet and mask during the shoot.

As per a report published by Times of India, the challan was issued at 7:02 pm by Assistant Inspector Nandkishore Jadhav. Somnath Gharge, DCP (Western Traffic) confirmed that the e-challan was issued. Police alleged that there was a violation of ‘pandemic prohibitory orders for not wearing a mask’ and said that a case was being registered against the actor.

The actor had shared the video on his social media accounts and captioned it – “What a start of this lovely valentine’s day with ‘Main, Meri patni aur woh! A refreshing joyride indeed!” The video, which went viral on social media, showed Oberoi riding a motorbike without a helmet or a mask.