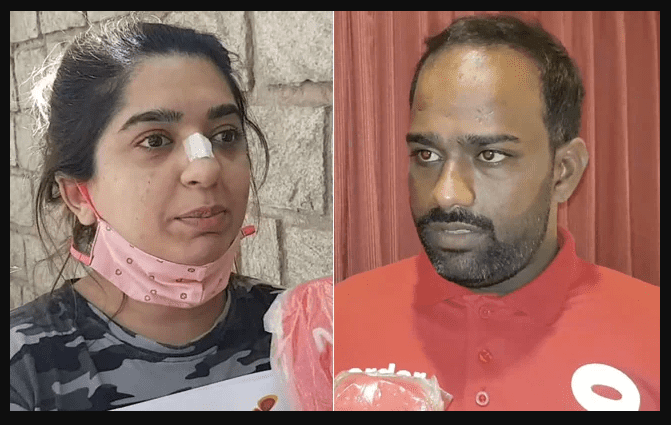 On a complaint filed by the delivery executive Kamaraj, she has been booked under sections 355 (assault), 504 (insult) and 506 (criminal intimidation) of the Indian Penal Code. The delivery executive has rubbished all the allegations leveled against him, saying “let the truth win”.

Recently, a Bengaluru woman named Hitesha Chandranee accused a Zomato delivery executive of assaulting her which left her nose bleeding.

“She refused to pay after accepting the order as I was late for the delivery and asked it for free,” Kamaraj, the accused, told ANI.

“She started hitting me with slippers and at some point in time while safeguarding myself, my left hand touched her right hand and the ring which she worn hit her nose and it started bleeding.

“I don’t want to make it more complicated, let the truth win. If not, I will fight it legally. I have a mother with co-morbid conditions, my father died 15 years back, I am the only breadwinner for my family. I am working in Zomato for the past 26 months with 4.7 ratings. As of now, the company has blocked my ID until this case completes and assured of taking it back once the matter resolves,” he added.