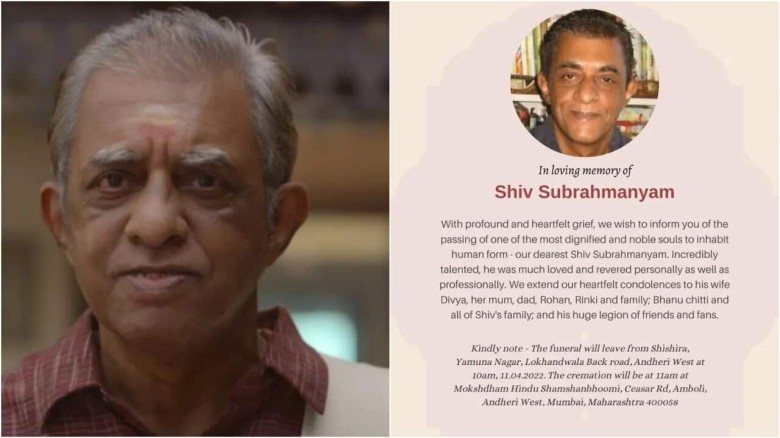 Shiv is survived by Divya, his wife, while his son, Jehan, died of a brain tumour two months ago.

Digital Desk: Shiv Kumar Subramaniam, known for films like 2 States, Meenakshi Sunderashwar, and Hichki, died today (April 11) in Mumbai. Aside from acting, he also wrote screenplays for films such as 'Parinda', '1942: A Love Story,' and 'Hazaro Khawishein Aisi'. Shiv was also awarded Best Screenplay for 'Parinda' and Best Story for 'Hazaron Khawishesh Aisi' by Filmfare. He also rose to prominence for his performance as the lead in the TV show 'Mukti Bandhan'.

Reportedly, Shiv's mortal remains will be cremated at Mumbai's Amboli crematorium on April 11. Hansal Mehta and Ashoke Pandit, both filmmakers, expressed their condolences on Shiv's passing. Hansal posted a statement about his death and funeral arrangements on social media.

Shiv is survived by Divya, his wife, while his son, Jehan, died of a brain tumour two months ago.

Meanwhile, Ashoke Pandit wrote, "Extremely shocked and hurt to know about the tragic demise of our dear friend, a great actor and a brilliant human being Shiv Subramaniam. My heartfelt condolences to his wife, Divya. May God give you enough energy to face this tragedy (sic)."

The Girl in Yellow Boots, Kaminey, Bombay Boys, Prahaar, and Parinda are some of the films of  Shiv Kumar.