In celebration of Veer Savarkar Jayanti, Randeep Hooda presents the first look of the biopic Randeep Hooda gives the first look at his forthcoming film. The film is a biography of liberation warrior Vinayak Damodar Savarkar.

Digital Desk: Vinayak Damodar Savarkar will be played by Randeep Hooda in Swatantra Veer Savarkar's biopic. The film will be released soon. 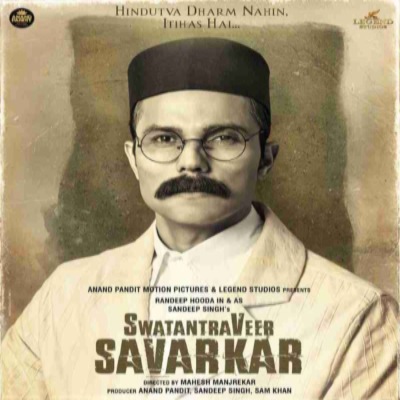 On May 28, remarked as the 139th birthday of Veer Savarkar, the creators released the first glimpse of Randeep Hooda as the freedom fighter ahead of the start of filming. Mahesh Manjrekar is set to direct the film.

Randeep Hooda tweeted, sharing the first-look poster of Swatantra Veer Savarkar- "A salute to one of the tallest unsung heroes of India's struggle for freedom & self-actualization. hope I can live up to the challenge of filling such big shoes of a true revolutionary & tell his real story which had been brushed under the carpet for so long #VeerSavarkarJayanti ."

Vinayak Damodar Savarkar was born on May 28, 1883, at Bhagur village of Nashik district in Maharashtra.

He was one of the most important figures of the Hindu Mahasabha, a Hindu nationalist organization and a political party. He was a politician, activist, and writer.

He is known to have developed the Hindu nationalist political ideology of Hindutva. Veer Savarkar died on February 26, 1966, in Bombay.