The singer's remains were transported to the Crematory in an ambulance decorated with flowers and a photograph of KK.
Digital Desk: In the presence of his family and close friends from the film industry, playback singer Krishnakumar Kunnath, better known by his stage name KK, was cremated on Thursday (June 2).
At around 2 pm, the popular singer's final rites were performed at Mumbai's Versova Hindu crematorium, just a kilometer from his Park Plaza apartment. The musician, who was only 53 years old at the time of his death, died in Kolkata on Tuesday night immediately after performing at a concert, shocking the music business and his admirers.
The singer's remains were transported to the Crematory in an ambulance decorated with flowers and a photograph of KK.
KK's son Nakul, who appeared heartbroken, conducted the funeral rites.
The 53-year-old singer's filmmaker friend, Vishal Bhardwaj, with his wife Rekha, filmmaker Ashoke Pandit, Javed Akhtar, Shankar Mahadevan, Udit Narayan, Abhijeet Bhattacharya, and others attended the funeral ceremony. 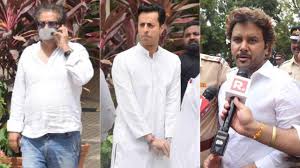 Moreover, Shreya Ghoshal, Salim Merchant, Alka Yagnik, Rahul Vaidya, Javed Ali, Papon, Shantanu Moitra, and Sudesh Bhosale were among the musicians who paid their respects to the singer at his home.
"It's a major setback. The entire industry is in a state of shock. He had an acidity problem for a few days, but other than that, he didn't have any health issues," Bhattacharya told reporters.
The West Bengal government saluted the singer with a gun salute on Wednesday. Mamata Banerjee, the Chief Minister of West Bengal, paid him floral tributes.
On Wednesday, his body was brought to his apartment in Mumbai from the Netaji Subhas Chandra Bose International Airport.
KK, who is recognized as one of the best vocalists, did not receive professional music instruction but quickly rose to prominence as one of the most popular singers of the late 1990s and early 2000s following his debut in Gulzar's 1996 film "Maachis."
After hearing KK's singing in Delhi, singer Hariharan pushed him to come to Mumbai. Later, they collaborated on Vishal Bhardwaj's song Chhod Aaye Hum Woh Galiyaan, which featured Suresh Wadkar and Vinod Sehgal.
Although KK is most known for his work in the Hindi film industry, he has also sung iconic cinema numbers in Tamil, Telugu, and Bengali.
Shah Rukh Khan, Emraan Hashmi, Salman Khan, Hrithik Roshan, R Madhavan, Vivek Oberoi, and Ranbir Kapoor are among the actors who have used his voice.
Yaaron', Tu Hi Meri Shab Hai', Tadap Tadap Ke Is Dil Se', Awarapan Banjarapan', Aankhon Mein Teri Ajab Si', Khuda Jaane', Zindagi Do Pal Ki', and Tu Jo Mila' are among KK's most popular songs.