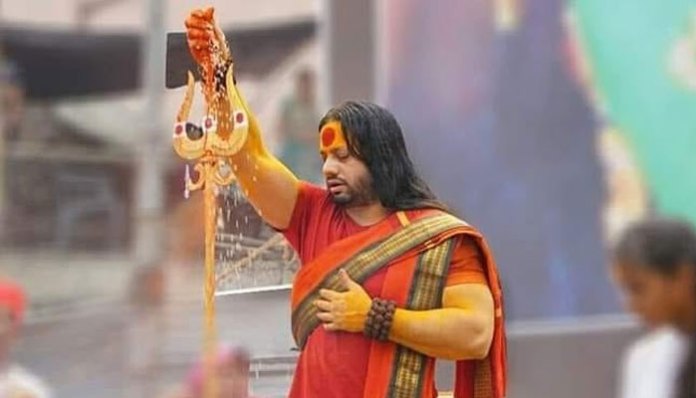 Kalicharan was arrested by the Chhattisgarh police for his alleged derogatory remarks against the father of the nation, following which he was taken into judicial custody till January 13 by a Raipur court on Friday.

The members of the right-wing groups gathered outside Deputy Commissioner’s residence and then after marched towards the Mini Secretariat raising slogans, “Sadhu-aanto ka apman nahi sahega Hindustan (seers should not be insulted).”

The group submitted a memorandum demanding the early release of Kalicharan Maharaj and urged for the arrest of AIMIM (All India Majlis-e-Ittehadul Muslimeen) chief Asaduddin Owaisi for making derogatory remarks against the police.

The right-wing groups also said that the policeman who will arrest Owaisi will be rewarded Rs 22 lakh.

“He insulted police officials at an election rally in Uttar Pradesh. Owaisi even said that Yogi Adityanath and Prime Minister Narendra Modi will not always be present to protect them (the police),” said Kulbhushan Bhardwaj, leader of a right-wing group.

The Chhattisgarh Police had arrested Kalicharan Maharaj from Khajurao in Madhya Pradesh. He was arrested for making inflammatory statements against Mahatma Gandhi and the minorities at ‘Dharam Sansad’ (religious council) held in Raipur on December 26.