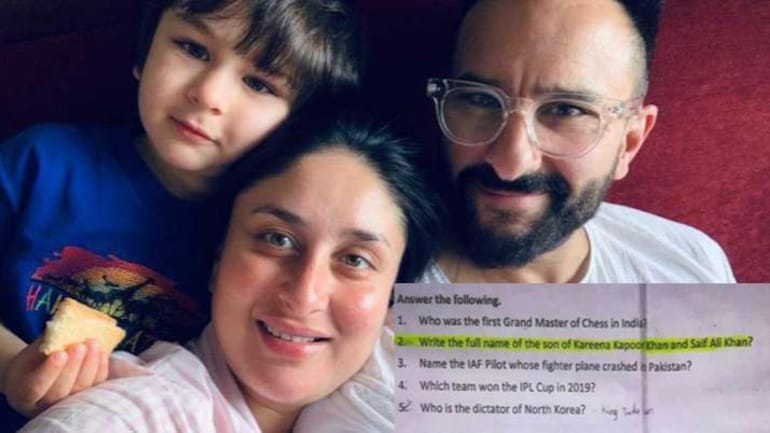 Bhopal: A private school in Madhya Pradesh received a show-cause notice after it asked the students to name the son’s name of Bollywood actors Kareena Kapoor and Saif Ali Khan as part of an examination.

Shocked parents filed a complaint against the school authorities following which the Madhya Pradesh school education department dispatched a show-cause notice against the educational institution.

The questioned figured in the current affairs section of the General Knowledge subject of class asking the full name of Kareena and Saif Ali Khan’s son.

Apart from the question asking the full name of the son of Kareena and Saif Ali Khan’s son, the other questions that appeared on the section included which team won the IPL in 2019 and the name of North Korea’s leader.

Expressing shock and disbelief on the question asked by the school during an exam, the District parents’ association president, Anish Jharjhare showing concern at the incident said, “How can the school administration ask the students such non-serious questions? Instead of asking students about historical icons and other legends, they asked for the full name of the son of a Bollywood couple.”

Despite repeated calls to the school, the school administration did not respond.

Meanwhile, the school administration is yet to reply on the above show-cause notice issued to them.

It may be mentioned here that Kareena and Saif Ali Khan’s first born, Taimur Ali Khan, became an overnight internet sensation as soon as his pics were released. His adorable pics soon started trending on social media platforms with paparazzi always waiting outside the Khan residence to get a glimpse of the star kid.

Tim Tim has he is cutely called by his star parents, Taimur has been an enthusiast poser for the paps, from waving his hand to giving that cute smile to the shutterbugs, Kareena Kapoor and Saif Ali Khan surely got the attention during their son’s toddler stage.