'We want an online exam,' CSK fan at the Mumbai stadium during an IPL match 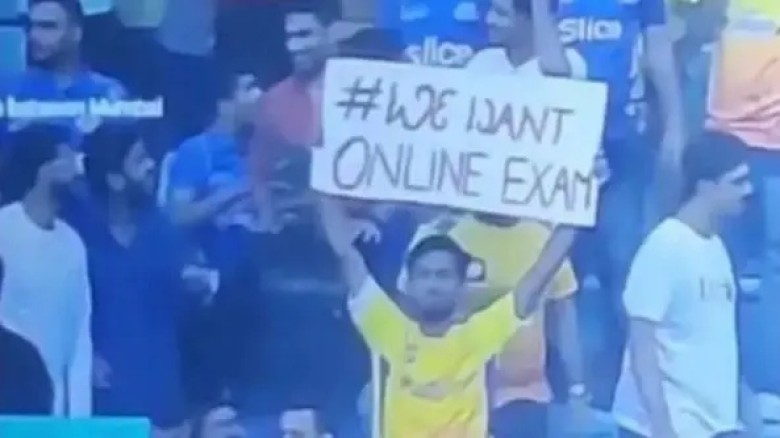 In the recent past, since IPL fever has flavoured the air, a youngster was spotted posing at the stadium claiming to resign from his job if Hardik Pandya hits 50 runs,

Digital Desk: The Indian Premier League is making headlines not only for soaring high shots, wickets, or victories, but also for off-the-field snaps.

As the camera pans through the stadium bleachers, people are seen not only enjoying their little fun-filled fan moment, but they are also caught on camera for their promises and wants.

The stadium's seating arena has evolved into more than just a cricket zone, with people viewing it as a platform to address critical messages, deliver long-awaited messages, and so on...

In the recent past, since IPL fever has flavoured the air, a youngster was spotted posing at the stadium claiming to resign from his job if Hardik Pandya hits 50 runs, and later a middle-aged female was held a placard to signal that she will not marry before Royal Challengers Bangalore wins the Indian Premier League trophy.

Now, during the MivsCSK game on Thursday evening at the DY Patil Stadium in Navi Mumbai, a CSK fan dressed in the respective IPL franchise jersey took to the screen to show his support for "#We want Online exam."

Since the COVID-19 pandemic, the education system has shifted to an online mode, and then to a hybrid session. Several students who listened to online lectures, on the other hand, demand that the examination be conducted in the same manner, implying that the difference in teaching-testing method is unjust.