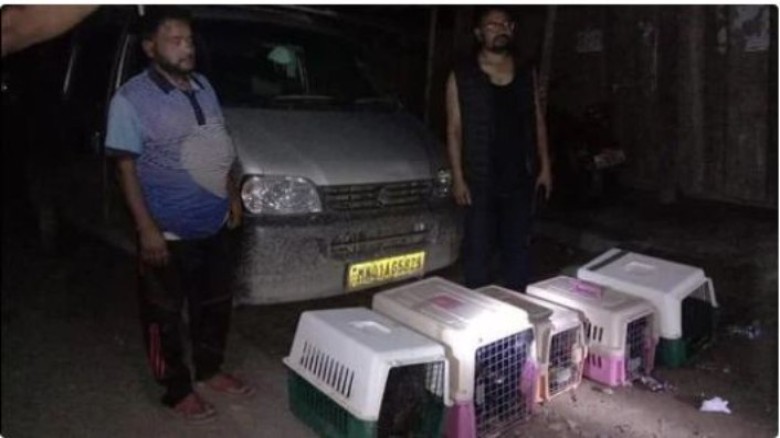 Digital Desk:  Two Manipur residents were arrested in connection with the rescue of the caged chimpanzees from a four-wheeler in Assam's Karbi Anglong district on Wednesday. Forest officials are interrogating the two Manipur residents..

“At around 5.30pm on Tuesday, officials from Dilai police station stopped the vehicle at naka checking and found that there were some caged animals inside. The two persons inside the vehicle attempted to flee but our officials managed to catch them,” SDPO said.

After that, police officials informed the forest department and a team from the department rushed to the spot. They identified the caged animals as chimpanzees which are believed to be transported from Myanmar through Manipur to Assam.

The arrested persons have been identified by Dilai police station officials as Habibur Rahman (46) and Janab Khan (50). Both of them live in the village of Sangaiyumpham in the Thoubal district of Manipur.

Police said all the items found in the apprehended persons were handed over to the assistant conservator of the forest department in the presence of the officer in charge of the Manja range of the east forest division of Karbi Anglong.

In an interview with Vipin Bansal of the Karbi Anglong East forest division, he explained that these are basically African species that have now been found all over the world. In addition to the adult chimpanzee, four juveniles have also been rescued.