India Among Top Five Countries In Terms Of Victims Of Cybercrimes: FBI report Pakistan, China, and other countries are behind India in the rankings.

The research stated that the United States had 4,66,501 victims in 2021,  followed by the United Kingdom, with 3,03,949 victims. With 5,788 and 3,131 victims, Canada and India are in second and third positions. It listed a total of 20 countries based on the number of victims they reported around the world. Pakistan, China, and other countries are behind India in the rankings. Other countries around the world accounted for just over 25,000 victims. 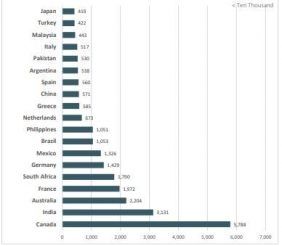 Business-email compromise schemes (BEC) caused $2.4 billion in losses in 2021. These hacks are aimed at organisations that have international suppliers and conduct wire transfers. Between 2017 and 2021, the IC3 received a total of 2,760,044 complaints, totalling $18.7 billion in losses.

The IC3 collected 23,903 complaints relating to tech assistance fraud in 70 countries, according to the study. Fraudsters deceive people by offering customer service, security, and other technical services. Scammers of this type are known to operate from India, with victims from around the world.

Losses from tech support scams totalled more than $347 million, up more than 137 per cent from 2020.

Finally, the research stated about 60% of the victims were above the age of 60. Reportedly, the victims lost a total of $238 million. Phishing, pharmaceutical frauds, and vishing (voice phishing) were among the most common cyber scams in 2021.