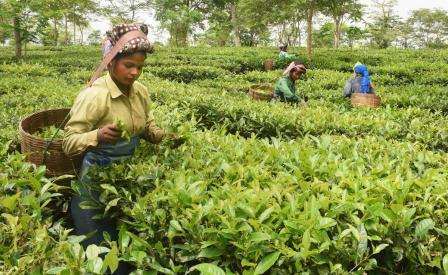 Guwahati, Assam: Assam has recorded 4,936 new positive cases, which was the ever highest single-day figure, on Thursday. Around 300 positive cases were detected in the tea gardens of Dibrugarh and Biswanath districts in the past few days.

The tea gardens have been declared containment zones. most cases are asymptomatic, they have been quarantined or in-home isolation, depending on their condition, he added.

“A sero survey in several tea gardens in our district last year found that most people were not infected during the first wave,” said Dr. Gogoi.

Several cases amid tea garden workers have been identified in Biswanath district as well. The administration has taken steps to assure that the virus doesn’t cast to other areas.

“We have detected 46 cases in Nilpur tea garden in the past 4-5 days. The area has been declared a containment zone and infected persons isolated. Most of them are asymptomatic. Those showing severe symptoms have been transferred to hospitals,” said Biswanath deputy commissioner Pranab Kumar Sarmah.

There were 46 deaths recorded in Assam, on Thursday. the state has presently recorded 31,829 active cases.