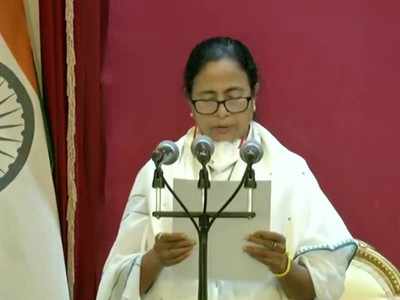 Kolkata: For the third term in a row Trinamool Congress Chairperson Mamata Banerjee today sworn-in as the Chief Minister of West Bengal. She was administered the oath of office by Governor Jagdeep Dhankhar.

After swearing in Mamata Banerjee for the third straight term, Governer Jagdeep Dhankhar said, “Our priority is that we must bring an end to this senseless violence that has affected society at large. I have every hope that the CM on an urgent basis will take all steps to restore rule of law.”

The event which was conducted at 10.45 a.m was a low-key programme because of the ongoing COVID-19 pandemic. Only 50 guests were allowed and no other Minister was sworn in. the guest list comprised key Trinamool Congress leaders, including MP Abhishek Banerjee and poll strategist Prashant Kishore. Former Assembly Speaker Biman Banerjee, TMC Secretary General Partha Chatterjee, senior leaders such as Subrata Mukherjee and Saugata Roy were present.

After the sworn-in ceremony Mamata Banerjee said, “I want to thank all the people of the state, Maa Maati Manus of West Bengal. There were many in the country and across the world whose eye were on west Bengal.”

Ms.  Banerjee said that her first priority would be to tackle the covid-19 crises. She also appealed for peace and ending the post-poll violence.

Moreover, Banerjee said, “I will appeal to all political parties to maintain peace. Take proper care that there is no violence. West Bengal does not like violence, and I do not support violence.”

Banerjee added, “For three months the administration was working as per the instructions of the Election Commission of India and some inefficiency has crept in. I will make a new set-up for it.”

Banerjee, who lost from Nandigram despite the astounding TMC victory, can be sworn-in as the chief minister but will have to get elected to the assembly within six months of assuming office.