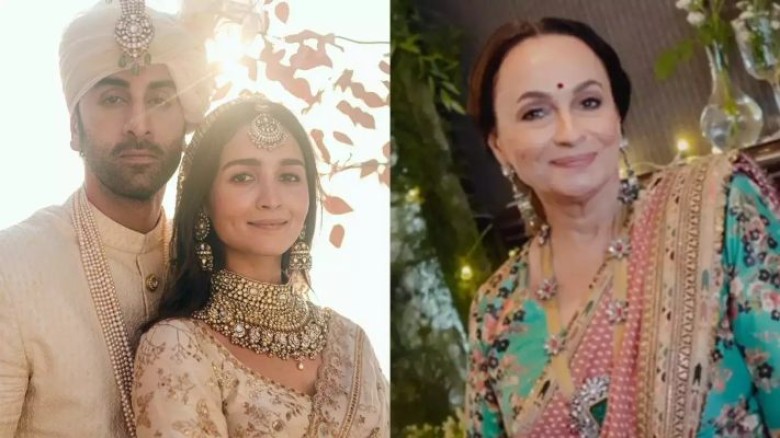 Soni wrote an emotional Instagram message on her daughter Alia's wedding day, addressing Ranbir as her son. Soni captioned a photo of Ranbir and Alia with the comment, "They say you lose a daughter when you gain a son. I say we gain a wonderful son, a lovely warm family, and my darling beautiful baby girl is right here with us always ♥️ 🤗🥂. Ranbir and Alia, here's wishing you so much love, light, and happiness in your journey together. Your loving Maa ♥️♥️♥️."

Let's check out the rituals followed at RaAlia's wedding.

The Juta Chupai ceremony stirs up Sooraj Barjatya's Hum Aapke Hain Kaun scene. Alia's bride gang wanted a whopping amount of  Rs 11.5 crores from Ranbir during RaAlia's knot tying. According to a Bollywood Life article, the fun affair was later settled with the groom handing over a Rs 1 lakh envelope in exchange for his shoes.

Alia carefully selected Kashmiri shawls for the wedding guests. "The fabric of these shawls was exceedingly exquisite, and everyone was in awe of it."

Ranbir And Alia as Bride and Groom gifts to each other

With their tender overtures towards each other, the power couple elevated the memorable occasion. While Alia gave Ranbir a band, the groom gave the bride a diamond ring.

Alia skipped her Chooda ritual for her upcoming Hollywood project

According to Bollywood Life, Alia skipped the traditional Chooda ritual; it required her to wear the Chooda for at least 40 days. "Alia will soon begin recording for her next," according to sources, "which will most likely be her Hollywood debut opposite Hollywood actor Gal Gadot." For the time being, she won't be able to wear the chooda." Next, the actor will be seen in Ayan Mukerji's Brahmastra, alongside her hubby Ranbir.