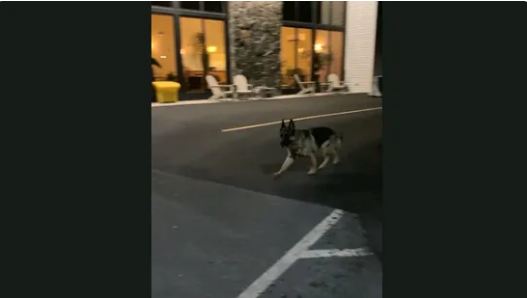 Digital Desk : A wholesome video which will bring a smile on your face and flicker your heart with love and affection for this adorable dog, who patiently waits outside the hospital for his brother.

Promise, you will not end watching this video once, but in repeated succession, after you watch how a pooch adorably shows concerns for his brother, even if he doesn’t have the speech skill like humans, to show his love.

Also read: “India would have turned into Afghanistan if…”, UP Minister’s big statement on PM Modi

The video shows a dog outside a veterinarian’s clinic, who is continuously strolling through the clinic premises while waiting to get a glimpse of his brother being treated inside. The video continues to show the pooch patiently strolling around and waiting for his brother.

The wholesome incident was captured at Scarborough in USA’s Maine.

Dogs sometimes go beyond their loyalty and devotion, showing their compassionate side. Even at the cost of their own safety, these canines can make your heart skip a beat if they face any danger while carrying out their task.

Some are rough, some are naughty while few others are lazy and grumpy. Whatsoever, these little paws know how to melt your heart with their little gestures of loyalty and affection.

The video shared here of this dog waiting for his brother, show how even the animal kingdom feels familial ties and manifest their loyalty in all possible ways.