According to a clip released on Instagram by the Guinness World Record, the huge pen manufactured in 2011 weighs 37.23 kg and measures 5.5 metres. By 1.45 metres, it broke the previous world record.

Guinness backed up the pen's usefulness by saying, "As per the guidelines, the pen 'dispenses ink at its tip during use by the rolling action of a small metal sphere'."

Srinivasa's crew can be seen etching motifs from Indian mythology on white paper in a video posted by Guinness. 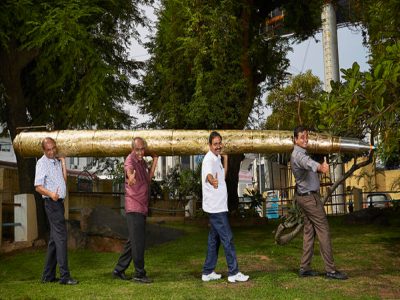 67,500 Instagram users have liked it, and 266 individuals have left comments.

Guinness World Records also announced the most flexible pen ever manufactured for pens.

According to Guinness World Records, the Space Pen range by Fisher Space Pen Co. (USA) is the most elastic pen. It dispenses visco-elastic ink from nitrogen-pressurized cartridges.

Thanks to this mechanism, the Space pens can work properly upside down in a wide range of environmental conditions, including high heat and cold, underwater, and even zero gravity in space.

According to Guinness World Records, the Orbit Pen was initially used in space during the Apollo 7 mission in 1968 and has since been the standard pen for astronauts, including those currently operating on the International Space Station.

Also Read: Know the age of the 'oldest surviving dog' having Guinness World Records in his name