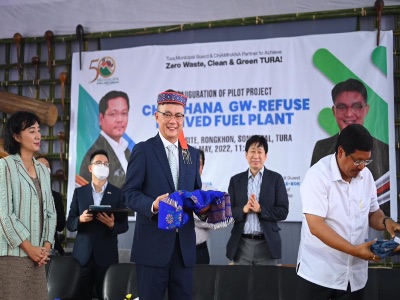 The facility, which is located at the landfill site in Rongkhon Songital, is a partnership between the Government of Meghalaya, Tura Municipal Board, and Chamhana GW of South Korea, and is a first of its kind in the country.

The current project in Tura is intended to serve as a functioning model demonstration (Proof of Concept) for managing the town of Tura's daily municipal rubbish and its surrounding areas.

The Chief Minister emphasised during the project's launch that the entire notion of converting waste to electricity will entirely change people's perceptions about waste and rubbish disposal.

CM Sangma stated “When I visited this site (landfill) I really wanted to do something and I didn’t know what and how but I knew that we needed to reverse this entire process of dumping the garbage here to making this place green again and more importantly finding a way… a technology that could enable us to ensure that the future waste that we generate could be put to a lot of things.'

Speaking at detail about the initiative, the Chief Minister stated that it was first conceived in 2019 but had to be put on hold due to the epidemic.

All garbage, except recyclables such as metals, glass, wood, and e-waste, construction waste, and other rubbish, will be converted into fuel briquettes at the current waste to energy plant.

After that, the fuel briquettes can be used to replace coal and charcoal.

If the pilot project is successful, the Chief Minister believes the government would expand and establish similar waste conversion units in other sections of the state.

The pilot project, according to South Korean Ambassador to India Chang Jae-Bok, who is on his first visit to Meghalaya, is the beginning of many meaningful and mutually beneficial collaborations between Korea and India in the field of technology that has the potential to greatly improve the quality of people's lives.

"In the future, our (Republic of Korea) Embassy in New Delhi would make every effort to build more mutually beneficial projects and cooperation," he said.

The current project in Tura is intended to serve as a functional model demonstration project (Proof of Concept) for managing the city of Tura's daily municipal rubbish. 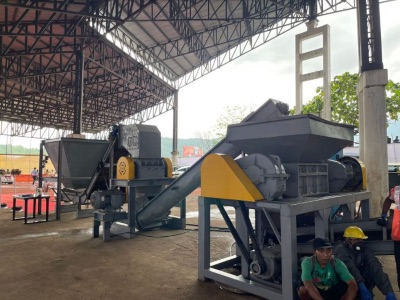 Chamhana will have the rights to market the fuel briquettes made from waste conversion to recover its capital investment. The plant has a 35 MT installed capacity, including management and maintenance of the plant as well as training of local personnel.

The manufacture of a catalyst WASTEF with the inclusion of a patented enzyme is at the heart of Chamhana's waste-to-fuel technology. The principal material used to make WASTE is organic waste (biomass) and all non-recyclables, including plastic garbage. 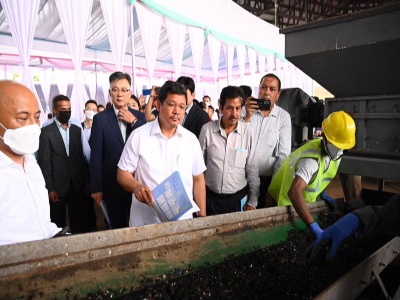 Except for recyclables such as metals, glass, wood, e-waste, construction waste, and others, all waste is crushed and then mixed with prefabricated WASTEF and enzyme before being consolidated and moulded, with moisture control provided by a dryer machine, to produce clean, green, odourless, and smokeless fuel blocks.

The entire process flow is automated and integrated, eliminating the need for manual intervention.

Also Read: IIT Guwahati Signs Accord With US Foundation To Launch School Of Health Sciences And Technology