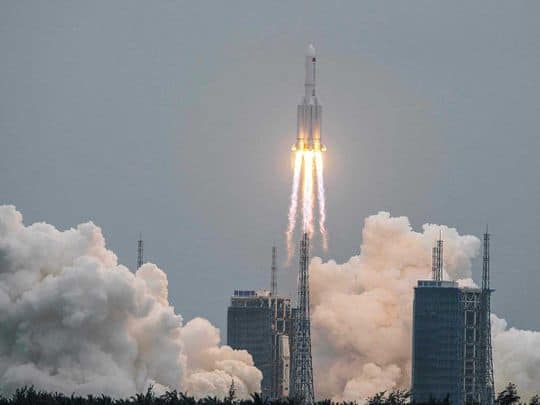 Beijing: Debris from a huge section of a Chinese Long March 5B rocket reentered the Earth's atmosphere over the Indian Ocean near the Maldives, China's space agency said.

US Space Command said in a statement that it could "Confirm the Chinese Long March-5b re-entered over the Arabian Peninsula". It was "unknown if the debris impacted land or water," the agency said.

Officials in Beijing had said there was little risk from the freefalling segment of the Long March-5B rocket, which had launched the first module of China's new space station into Earth orbit on April 29.

"After monitoring and analysis, at 10:24 (0224 GMT) on May 9, 2021, the last-stage wreckage of the Long March 5B Yao-2 launch vehicle has reentered the atmosphere," the China Manned Space Engineering Office said in a statement.

It added that most of the segment disintegrated and was destroyed during re-entry.

The news comes after days of uncertainty, with experts saying the rocket's size and speed made it nearly impossible to pinpoint what might happen as it fell to earth. The section was roughly 100 feet long and is among the biggest pieces of space debris to fall to Earth.

The debris came from the largest section of the rocket, which launched the main module of China’s first permanent space station into orbit. Usually, discarded rocket stages reenter the atmosphere soon after liftoff, normally over water, and don’t go into orbit.

The Long March was the second deployment of the 5B variant since its maiden flight in May 2020. Last year, pieces from the first Long March 5B fell on Ivory Coast, damaging several buildings but no injuries were reported.

"Space faring nations must minimize the risks to people and property on Earth of re-entries of space objects and maximize transparency regarding those operations," NASA Administrator Bill Nelson, a former senator and astronaut, said in a statement after the re-entry.

China’s first space station, Tiangong-1, crashed into the Pacific Ocean in 2016 after Beijing confirmed it had lost control. In 2019, the space agency controlled the demolition of its second station, Tiangong-2, in the atmosphere.

According to sources, the police van was transpor

Orry is seen partying with