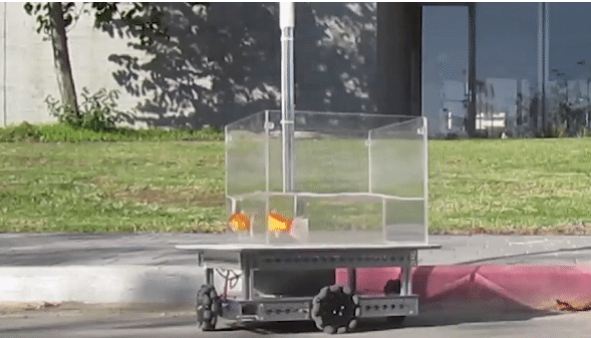 Digital Desk : If there could have been a better adjective to describe this weird video then maybe the experiment might have attracted more astonishing reactions. In an exceedingly weird experiment and equally bizarre video has gone viral lately. A goldfish driving a water-filled, motorized “car” from one end of a room to another, bobbing and weaving to avoid obstacles has made it to social media platforms.

The experiment that captured the attention of the netizens, filled with weird comments, seek to find the mobility of goldfish in search for food in the wild. But it is not always clear how these animals learn to navigate a space and, for fish, whether the brain networks that allow them to navigate a coral reef would be of any use on land.

Animal navigation has always been a topic of discussion and curiosity among researchers and scientists trying to understand animal behaviours.

"Because fish are notorious for not surviving out of water, we had to build this inverted submarine," said Shachar Givon, a doctoral student at Ben-Gurion University of the Negev in Israel.

FOV or fish operated vehicle, in which the goldfish was kept, was essentially a plastic aquarium mounted on a small platform with wheels. A single goldfish in the aquarium can pilot the vehicle simple swimming.

It isn’t the first time such experiments have been conducted on animals and fishes. Earlier in 2014, a group called Studio dip developed a similar ‘submarine’ for the goldfish, but at the time, it was more of a software demonstration than an exploration of fundamental animal behaviours.

“It is more of a fun novelty”, said Givon and her colleagues at Ben-Gurion Univeristy of the Negev Matan Samina.

In the study, six goldfish were trained to pilot the FOV. "Training was the easiest part," Givon said. "I simply put it in a situation where it learns what is going on around it."

"If you put a person in a car for the first time without telling them anything about it, they will realize that what they do with the steering wheel matters with which way the car goes," Givon told Live Science. "The same goes for the fish — it realizes this slowly, but all on its own."

The experiment sought to find out whether the fish can move and make sense of its environment while inside the vehicle.